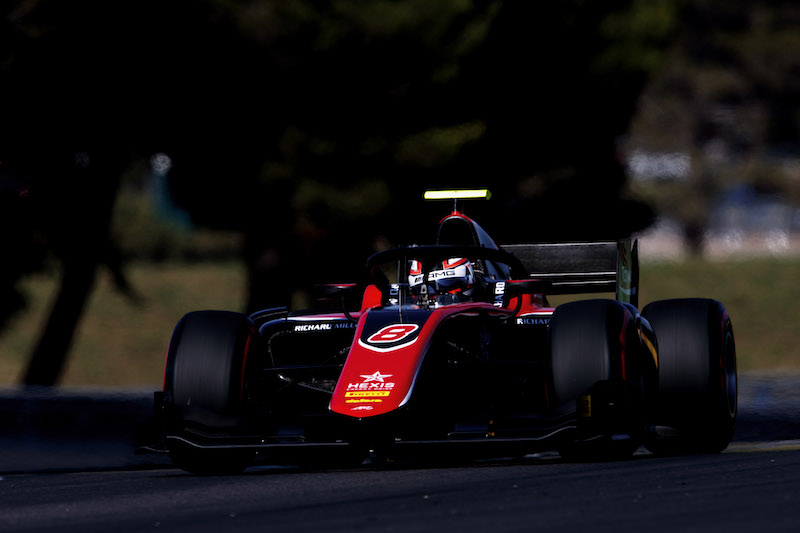 George Russell fended off a late charge from Sergio Sette Camara to win a frenetic Formula 2 feature race at Paul Ricard and close on championship leader Lando Norris, who stalled on the grid and finished 17th.

All 20 drivers started on slick tyres, but when the rain intensified, some drivers switched to wet tyres. However, this proved to be the wrong decision when the rain stopped shortly after they changed tyres.

Russell’s ART Grand Prix team-mate Jack Aitken and?Maximilian Gunther were among the drivers to drop out of the top 10 due?to what would prove to be an?incorrect call, having to pit a second time to switch back to slick tyres.

Polesitter Russell fired in a sequence of fastest laps at the start of the race which allowed him to race into an early lead which he held until the flag, ending the race 1.108 seconds ahead of Sette Camara, who returned to the championship after missing both Monaco races due to a hand injury sustained in qualifying for the event.

Sette Camara closed the gap to Russell to within a second in the closing laps, but Russell withstood the pressure and claimed his third win of the season.

Former Formula 1 driver Roberto Merhi earned his second podium in as many races for MP Motorsport despite starting in 14th place, while Luca Ghiotto recovered from an opening lap spin to come home in fourth place.

Nyck de Vries, who started alongside Russell on the front row, struggled in the changeable conditions, taking multiple off-track excursions and dropping down the order.

When the rain stopped falling, de Vries’ pace improved and he was able to climb to fifth, though he was demoted by Antonio Fuoco to sixth on the final lap.

Fuoco finished fifth despite serving a 10-second stop-go penalty after his mechanic ran to aid his stalled car just as the formation lap started.

His Charouz team-mate Louis Deletraz finished in seventh ahead of Nicholas Latifi, who took eighth place and reverse grid pole from?Tadasuke Makino on the very last lap after the Russian Time driver had got ahead.

Nirei Fukuzumi charged from 18th on the grid to claim the final place in the top 10.

Monaco feature race winner Artem Markelov stalled along with Norris at the start, ending the race in 15th position, two places ahead of Norris who tried a gamble on tyres and is now only seven points ahead of Russell.

Alex Albon’s frustrating season continued as mechanical issues dropped him out of a potential podium place.