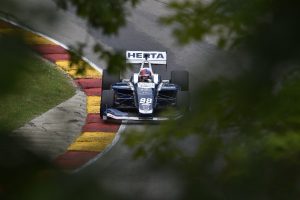 Colton Herta continued his winning streak in Indy Lights with his fourth successive victory in the opening race at Road America.

Herta was immediately aggressive though, taking second from Belardi Auto Racing’s Santiago Urrutia through the first corner and then hounding Franzoni.

Fastest lap on the third lap, a benchmark that was not beaten for the rest of the race, brought Herta onto Franzoni’s tail, and he went for a move on the outside of the Turn 5 left-hander two laps later.

Franzoni trail braked on entry, and then used up all the track on exit to maintain the lead. Herta was unfazed, and a lap later he attempted the same move, this time sweeping around the outside on corner entry.

Patricio O’Ward, Herta’s main title rival and Andretti team-mate, moved into second two corners later when Franzoni went wide and spent the first half of the Hurry Downs straight trying to keep his car straight after it bounced across the grass.

O’Ward has been notorious this season for using up his tyres too early, and his reduction of Herta’s lead from 1.3 seconds to 0.4s over the next few laps suggested he’d done just that once again.

Although he was often faster in the first half of the lap, O’Ward had no answer to Herta through the Carousel and the remainder of the lap, where the Mexican’s car was squirming through most corners.

The lead gap grew again as a result, and with O’Ward going for a more cautious approach in the closing laps to ensure his second place finish, Herta was left to take his fourth win of the season by 3.7s.

Franzoni dropped pace quickly after being demoted to third, but then got a hold on his car and only finished 2s behind O’Ward.

Belardi Auto Racing duo Santiago Urrutia and Aaron Telitz finished fourth and fifth, with the positions almost being reversed when a late lock up brought Telitz onto Urrutia’s tail. Ryan Norman was the last driver on the lead lap in sixth, with Dalton Kellett pitting and going a lap down after chewing up his front tyres.