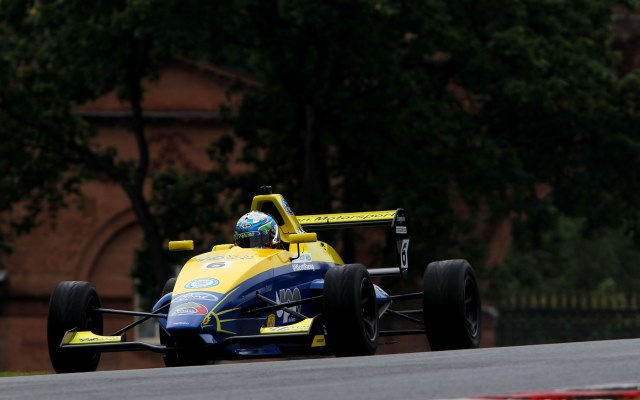 Harrison Scott came out on top of a Formula Ford GB qualifying battle with rival Jayde Kruger at a damp Oulton Park.

A couple of quick laps towards the end of the session had put championship leader Kruger clear of Scott, but the Falcon driver hit back with his final effort to out-pace the South African by 0.163 seconds.

That gives Scott pole position for the first race of the weekend, but he will line up in second for race three, with Kruger having managed the quicker second-best time by over three tenths.

Juan Rosso was third fastest for the Radical squad, while Andy Richardson made it four teams in the top four places on a one-off comeback with his family-run team.

Double Thruxton winner Sam Brabham could only manage the fifth best time, but will start third for race three with Rosso alongside him.

James Abbott was sixth quickest in the second Radical entry with Ricky Collard the top scholarship runner in seventh. Collard will be fifth on the grid for race three ahead of Abbott and Richardson.

Max Marshall will start both races from eighth in the third JTR car, while Chris Mealin and Ashley Sutton will share row five for race three. Sutton will start ninth in race three with Connor Mills tenth and Mealin 11th.?Connor Jupp, making his debut in the second Meridian Motorsport car, will start 12th.