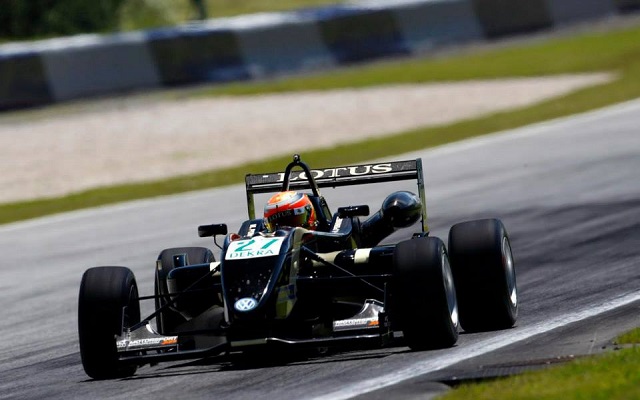 Lotus driver Markus Pommer converted his pole position into victory in what was a rather messy opening race for the German F3 series’ third round at Spielberg.

The German appeared to have a slow getaway as Sam MacLeod stormed into the lead, leaving Pommer way behind in second. However, as the Lotus driver fended off another VAR racer Weiron Tan, he was soon given back the lead when MacLeod was handed a drive-through penalty for jumping the start.

Over the first ten minutes, Tan managed to keep up with Pommer, but soon cracked under pressure from Nabil Jeffri and spun out of second in the final corner of the eighth lap, rejoining four places down.

Tan’s self-elimination coupled with Indy Dontje‘s brilliant “dummy” overtake on Nicolai Sylvest set up a Motopark 1-2-3, with the grid appealing to settle into their respective positions.

At this point, however, the strict track limit rules at Spielberg reared their head, with penalties handed down left and right.

Nikita Zlobin was the first driver to pick up a drive through, immediately followed by Maximilian Hackl and Tan. The Malaysian ended up actually failing to serve his and was consequently black-flagged.

There was further trouble up the road as a recovering MacLeod spun around into a sharp turn by trying to lunge down the inside of Andres Mendez, who himself was in the process of lapping Luca Iannacone.

Sylvest’s solid race came to an end on lap 18 when he went over the inside of a kerb and ended up wrecking his right rear wheel.

At the front, it was the expected Motopark 1-2-3, with Pommer comfortably cruising to take the checkered flag. Series debutant Santino Ferrucci managed an impressive fourth ahead of Mendez, MacLeod, Zlobin and Hackl. A lap down, Luca Iannacone rounded out the finishers.