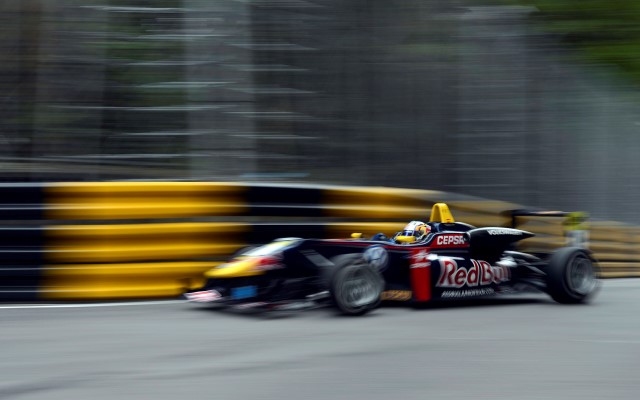 Macau Grand Prix organisers have released the entry list for this year’s Formula 3 race, with Carlos Sainz returning to F3 to lead the field as part of a six-car line-up from 2012 winners Carlin.

It will be Sainz’s third appearance in the race, hoping to improve upon his seventh place finish last year. The Spaniard has yet to contest an F3 race this season, having been racing in GP3 and Formula Renault 3.5, and so is set to enter the MSV F3 Cup round at Snetterton like last year’s Antonio Felix da Costa did in order to qualify.

Sainz is joined in Carlin’s assault by fellow Red Bull Junior Daniil Kvyat, with the pair looking to repeat Felix da Costa’s success. Kvyat will be making his Macau debut having taken part in the FIA F3 European Championship with Carlin alongside his GP3 commitments, claiming pole positions and a race win. He will fight for the GP3 title in Abu Dhabi two weeks before Macau.

Jazeman Jaafar will return for his fourth attempt at Macau and his third with Carlin. He has raced for the team in Formula Renault 3.5 this year but also claimed a double victory on his return to British F3 at Brands Hatch. Harry Tincknell, currently fifth in the European standings for the team, gets to drive with Carlin having entered with Fortec last year. Jordan King makes his Macau debut after winning the British series, with fellow rookie Nicholas Latifi completing Carlin’s sextet.

Mucke Motorsport also bring a three-car line-up headed by their European Championship contender and 2012 Macau runner-up Felix Rosenqvist. Mitch Gilbert returns after making his debut with the team in Macau last year, as does Yuhi Sekiguchi after his fine fourth?with the German squad in 2011, when he also won the Japanese F3 title. Now a regular in Super GT, he qualified by contesting the F3 Masters earlier this year for Mucke.

Fortec Motorsport have a five-car entry, led by the team’s European Championship regulars Felix Serralles and Pipo Derani – the latter finished sixth last year. Joining them are Will Buller, who previously did Macau with the team in 2010 and 2011 and won the Formula BMW race in 2009. Tom Blomqvist switches from Eurointernational to the team with which he won the 2010 Formula Renault UK title, while German F3 regular John Bryant-Meisner adds Macau to the two remaining European Championship rounds he will contest with Fortec.

EuroInternational’s sole car is on the entry list but without a driver confirmed.

Alexander Sims will race the ThreeBond T-Sport car for the second year in a row, having contested the three most recent rounds of the European Championship and finished on the podium at the Nurburgring.

Double R will have a four-car entry with Kevin Korjus returning for a second attempt with the team. The GP3 regular will need to do an F3 race to qualify, with Autosport expecting him to replace Sims at T-Sport for the European Championship finale at Hockenheim. Team regulars Antonio Giovinazzi and Sean Gelael will make their Macau debuts while Sun Zheng will be the sole Chinese driver in the race after winning this year’s British F3 National Class.

Sven Muller will line up with his new team Van Amersfoort Racing while fellow German Lucas Wolf and his URD Rennsport squad will be present for the second year running.

The Japanese F3 Championship will be represented by dominant champion Yuichi Nakayama making his second appearance with TOMS and Katsumasa Chiyo with the B-Max Engineering outfit. Both will revert back to older-spec engines after the Japanese series took up the new FIA powerplants this year.