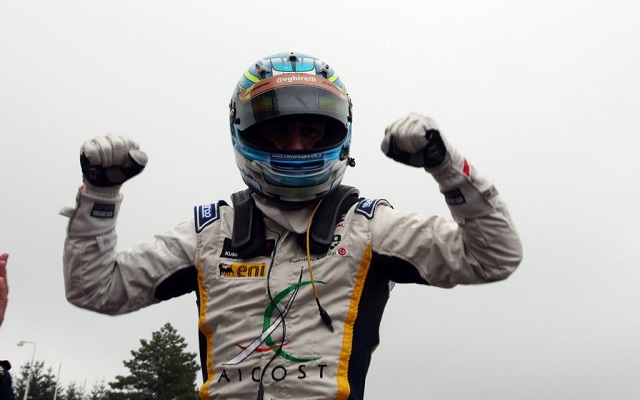 A light yet intense weekend in junior single-seaters saw titles for Italians Ghirelli and Fuoco, while the F3 Open series distilled it’s championship battle to a two-way fight…

Karthikeyan and Sato take wins, are unable to deny Ghirelli the title

Despite a decent points gap over his nearest rivals, Auto GP championship leader Vittorio Ghirelli was not expected to secure the title with ease. With three competitors with tons more experience right on his heels, the Italian was looking at a serious test during the series at finale at Brno. However, in what turned out to be a much calmer resolution than expected, Ghirelli did exactly what he needed to do to put the championship beyond doubt.

The Super Nova man dealt what was, perhaps, the decisive blow to his opponents’ chances in qualifying, becoming the first driver to beat ex-F1 racer Narain Karthikeyan to pole since the Indian became his teammate, albeit not without some help from a well-timed session stoppage. Still, the one point for pole ended up mattering more than starting from first, as Ghirelli surrendered the lead to Karthikeyan after a slow stop, subsequently recovering to second to complete a Super Nova 1-2. In race two, Ghirelli only needed a comfortable points finish to become series champion, and, in spite of another slow start, he slowly but surely made his way through the field, eventually taking fourth and the title. 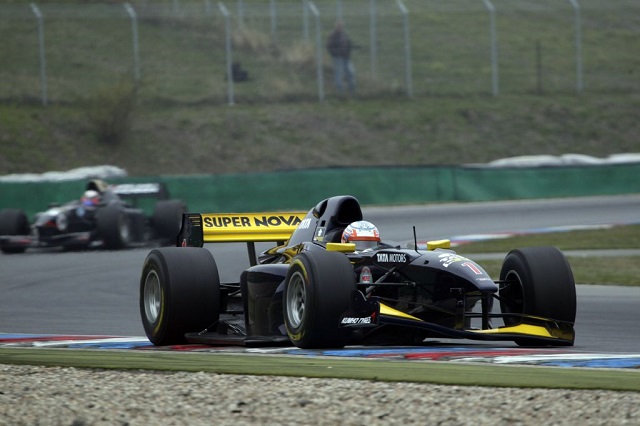 Super Nova’s weekend was a bit marred in race two, when Karthikeyan, following up from his victory in race one, was stripped of a podium finish in race two. The Indian driver, who ran the majority of the race with a severely damaged front wing, apparently ignored a black-and-orange flag and was excluded from the race results, promoting Ghirelli to a podium finish yet losing third in the standings.

Karthikeyan’s troubles allowed Euronova’s Kimiya Sato to cruise to second in the standings, with the Japanese driver momentarily seeming like Ghirelli’s biggest worry. Indeed, he was a provisional champion in the early stages of race two, as he stormed to the lead from fifth on the grid. The slim hope was soon gone, but Sato’s fifth victory of the season looked like a good consolation prize.

Ibiza Racing Team’s Sergio Campana was, perhaps, the obvious underdog in the title fight and saw himself out of championship contention following a sixth-place finish in race one. He still got to add a podium finish to his CV, with second in race two, and, following Karthikeyan’s exclusion, was promoted to third in the overall standings.

Outside of the title fight, usual guest frontrunner Kevin Giovesi had his promising weekend undone with a technical failure on lap one of race one. His teammate Robert Visoiu, on the other hand, was relieved to return to the podium in race one, nearly keeping Ghirelli at bay for second but ultimately losing out during the pit stops.

Report: Karthikeyan stays in contention with race one victory at Brno 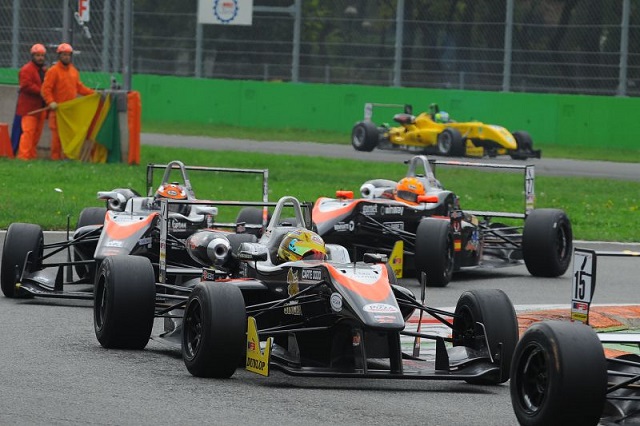 The penultimate round of the F3 Open championship might have left only two drivers with a mathematical shout of the title, but the fight for the crown looks set to be as close as ever, with Sandy Stuvik and Ed Jones leaving Monza as almost equal rivals.

The status quo in the group was preserved due to a somewhat unusually balanced weekend that saw a shift in advantage between Saturday and Sunday running.

On the former day, the Team West-Tec duo of Nelson Mason and Jones locked out the front row, with rival squad RP Motorsport recording a best starting spot of fifth. With Mason getting a slow getaway, Jones would lead into turn one, remaining relatively unchallenged for the win in the race. His Canadian teammate used the superb pace of the West-Tecs to snatch away second, while three RP cars followed suit to round out the top five ? with Alex Toril leading Stuvik and Santiago Urrutia.

The tides were turned on Sunday where, in seemingly different weather conditions, RP reigned supreme. Their qualifying effort was a stellar 1-2-3, with Frenchman Alexandre Cougnaud taking his first pole ahead of Urrutia, Stuvik and top West-Tec man Jones. The Sunday race itself was a classic show, with a number of drivers battling it out for the win in slightly damp conditions. While Jones was ruled out due to a failed tyre gamble, Mason and BVM’s Mario Marasca took the fight to the RP cars, but, eventually, both yielded. One of RP’s challengers, Urrutia, was also ruled out after he crashed out of the lead mid-race. As such, the fight went down between Stuvik, Cougnaud and Alex Toril, with the Thai man prevailing on the final lap.

While Stuvik seemingly leads Jones by a whopping 20 points ahead of the finale, the gap is made meaningless by F3 Open’s system of dropped scores. With Stuvik currently set to lose 22 points for his two worst performances ? and Jones having to give up none ? it looks like it’s all yet to play for in the championship fight.

Meanwhile, in the Copa category, Igor Urien and Richard Gonda picked up class victories, with the latter looking to arrive at Catalunya in pole position for the trophy.

Next round: Catalunya, November 9-10 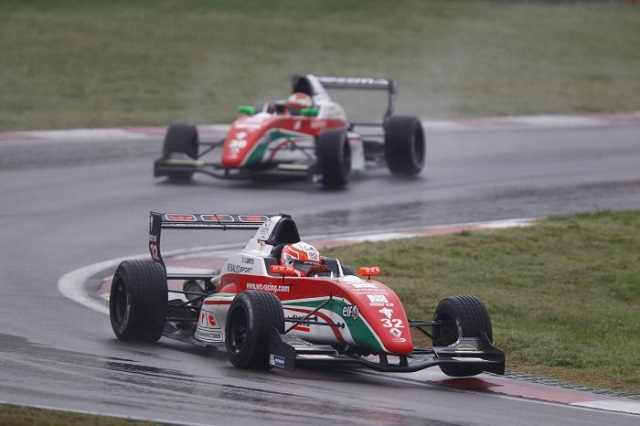 Ferrari Driver Academy prodigy Antonio Fuoco arrived at Imola one point away from putting the title beyond doubt. With the title seemingly decided, his only opponent, Luca Ghiotto, did all he could to create intrigue, but even a perfect weekend from the latter did not pose much of a threat to Fuoco’s coronation.

The two men topped their respective groups in qualifying, with Ghiotto securing double pole in by a relatively slim margin. The wet track appeared to be a recipe for havoc in race one, but the two Prema men did not allow incidents in the title fight, comfortably running away from the field in formation to cross the line in a Prema 1-2, which meant the Alps series was officially called in favour of Fuoco. Ghiotto then pulled the same trick in race one, while Fuoco crossed the line in third, only to be promoted to second post-race.

There were a number of fascinating stories in the Alps finale apart from the leading duo. Formula Renault 2.0 NEC’s almost-champion Matt Parry made an impressive debut with Koiranen, keeping a cool head in race one to take third and seemingly going one better in race two. However, he was adjudged to have unfairly raced series frontrunner Bruno Bonifacio, with the Brazilian completing a pointless weekend in the wall as a result. As such, the Briton was slapped with a time penalty, allowing Tech 1 man Egor Orudzhev to get on the podium.

Despite it being a weekend with fewer championships that usual, there’s no doubt Luca Ghiotto earned his stripes with the Imola performance. Double pole and double win in difficult track conditions is one marvelous way to end a championship.