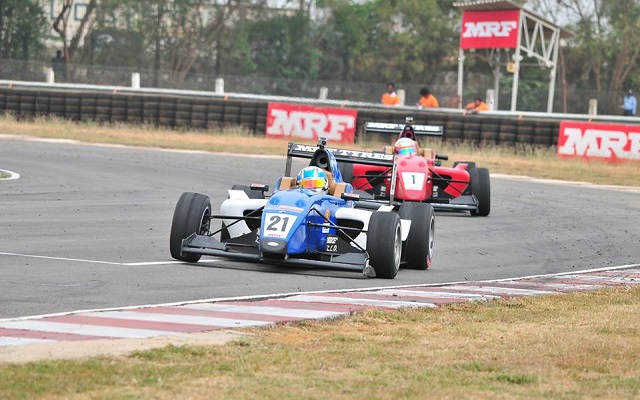 British racer Rupert Svendsen-Cook has been confirmed as the 2013-14 MRF Challenge champion after successfully appealing against a post-race penalty that would see him denied the title.

“I’m absolutely delighted to be confirmed as champion,” Svendsen-Cook told PaddockScout. “I knew, of course, in myself that I already was one, but it took the edge off a fantastic weekend for me in Chennai when I received a penalty three hours after the race.”

Svendsen-Cook originally secured the title by finishing second in the final race of the series at Madras. However, he was then given a time penalty and demoted out of the points. Having fallen behind behind rival Tio Ellinas as a result, Svendsen-Cook lodged an appeal.

“The penalty was for ‘rejoining in an unsafe manner’,” he elaborated. “I don’t want to go over old news but, in my opinion, nothing was unsafe. In fact, I was very safe, avoiding all incident in a very dangerous situation! After I received a 30-second penalty, I elected to appeal immediately as I knew nothing was wrong.”

“The appeal had to be heard by an independent panel and closed within 30 days, which was done. I travelled back to India earlier this month and was very impressed with how fair the hearing was. It is a credit to Indian motor racing that such a delicate matter was handled so professionally. The panel agreed that there was no clear evidence of dangerous driving after considering video footage and the appeal was allowed, and I became champion again.”

The successful appeal means Svendsen-Cook is reinstated to two points ahead of Ellinas in the standings. The Brit came into the final round of the series in third place, but managed to leapfrog both his Cypriot rival and the absent Arthur Pic after Chennai.

“I had a tremendous season, as really I had previously not raced for more than a year in a single seater. I was regularly fighting at the front and beating drivers who had a full season’s racing under their belts. To be champion certainly proves my ability.”

The newly-crowned MRF champion stated he doesn’t have his 2014 plans finalized yet, but is looking beyond single-seaters. Svendsen-Cook is also heavily focused on driver coaching, with his protege Tarun Reddy set to make his Protyre Formula Renault debut this year with MGR.

“Personally, I am working very hard to find an opportunity in GTs or Sportscars this season but my budget is almost nothing so it’s very hard. I am sure something will come but it’s a tough world!”

“My management and coaching business RSC Performance has taken a lot of my time, and I get great rewards from it. I have a young Indian driver – Tarun Reddy – who will compete in Formula Renault BARC this season with MGR. He has come from nowhere and is developing well so I am excited to see what we can achieve this season. I’m also a Performance Manager with the MSA Team UK Academy.”
MRF ChallengeRupert Svendsen-Cook
0
FacebookTwitterRedditEmail
previous post