There were different winners from the three F3 European Championship races at Silverstone, and the three drivers in question now hold the top spots in the drivers standings…

Wins for Tincknell and Rosenqvist, though Marciello extends lead

While the second round of the F3 European Championship 2013 season at Silverstone carried some major implications for the title fight, the main historical impact of the weekend will, perhaps, be seen in Harry Tincknell‘s outstanding performance that cemented him as the team leader at Carlin and proved his ability to challenge the obvious favorites. Notoriously better in reverse-grid races than in the more straightforward events, you could expect Tincknell to struggle this year, given that the former type was removed from the sporting regulations. However, two rounds in sees Tincknell doing everything in his power to dispel that belief.

While the qualifying was, indeed, skewed due to rainy conditions and a red flag, Tincknell’s three laps that were better than anyone else’s best, thus resulting in a double pole, are not to be underestimated. He continued to impress later that day, calm and collected during race one, which saw him fight off fellow Brit Alex Lynn for the entirety of the race distance without once cracking under the immense pressure.

Race two proved a little more difficult for the Carlin man – losing pole off the start, he, nevertheless, managed to regain the lead after some safety car confusion, but his tyres didn’t hold up by the end, and he only managed fourth. A very quiet performance in race three sees him fall down to third in the standings, but this is still further up than most would expect at the start. 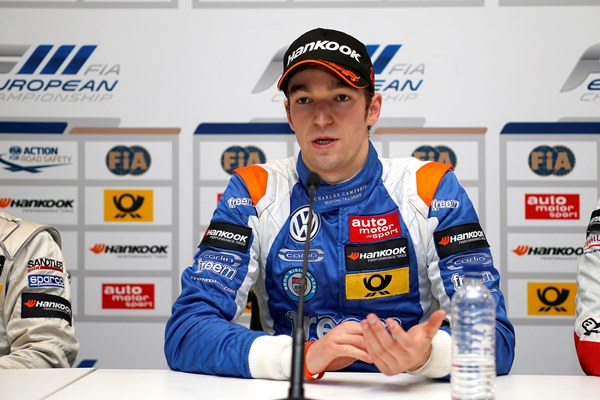 While Tincknell was the revelation of the weekend, it was Swede Felix Rosenqvist who turned in the most prolific performance, scoring three podiums during the weekend. He drove a very confident race during the weekend opener, finishing third while never challenging or being challenged. In race two, he managed a spectacular start off the line that saw him go third-to-first before turn one and, while he messed up the restart, he soon took the lead right back like nothing happened and wasn’t troubled again. Race three saw another masterful display from the Swedish man, who again took the lead into turn one and managed to hold the opposition back for most of the race, ultimately having to settle for second. With Rosenqvist back on his late-2012 form, he has to be considered a definite contender and now settles in in second in the points.

Not willing to be outdone, the championship leader Raffaele Marciello also produced some headlines. His confident qualifying efforts were par for the course, but race one proved to be a disappointment, with a really bad start demoting him far from the race leaders, from which, in the end, he only managed to recover to sixth. The second race was, indeed, a huge improvement, but a mistake under breaking early on jeopardised his chances of winning. Down to ninth, he put in a stunning recovery drive to finish second, but could not do a thing about Rosenqvist. That changed in race three – finally, Marciello was in prime position to challenge for the win and, keeping up with the Swede for most of the race, passed him with few laps to go to take his maiden Silverstone victory. Despite not being the highest-scoring driver of the round, he still lies in first in the championship, with a rather massive gap of 36.5 points to Rosenqvist.

It was a good weekend for another Prema driver, Alex Lynn. Having qualified immensely well, the British driver was a whisker away from victory in race one, tailing Tincknell throughout the race but ultimately falling short. Race two started out in disaster, with Lynn spinning and falling back to 20th, but the Briton was seemingly unfazed by that, putting on a phenomenal recovery drive and finishing sixth. Having started race three from pole, he was no match for the leading duo, but provided the team with another podium and lies in fourth in the standings.

The two other Prema drivers, Eddie Cheever, Jr. and Lucas Auer, were rather evenly matched on pace. However, whereas Cheever struggled to convert his pace into consistent points, with only one points finish in three races, Auer had no such problems. Two strong top-ten finishes and a podium in race two on top see the Austrian in fifth in the beginning of what is looking like a fantastic rookie campaign.

While Fortec continues to struggle for pace somewhat, Felix Serralles, Pipo Derani and Josh Hill produced some decent performances, with the Puerto-Rican emerging as the team leader. While Derani and Hill scored six points each, Serralles added 16 to his tally, despite not starting in race two. His standout performance came in the last race of the round, where Serralles fought from nineteenth on the grid to fourth in what was, perhaps, the best run of the weekend.

Brits Will Buller and Tom Blomqvist did well, albeit didn’t produce any spectacular results, with five points finishes between the two. Carlin’s Jordan King and Jann Mardenborough were also rather impressive, although the former seemed to struggle for consistency. It was Nicholas Latifi, though, who upstaged the other Carlin rookies, having managed to keep up with the leaders in race one to finish a remarkable fifth, holding off none other than Marciello.

Next round: Hockenheim, 4-5 May

MacLeod on pole, but loses out on wins to regulars

The first round of the 2013 Protyre Formula Renault championship at Donington was a rather good start to Sam MacLeod‘s single-seater career as the karting graduate took double pole on his debut. The Fortec man didn’t fare so well in the races, losing the lead three laps in on race one to finish second and being muscled down the order in race two.

Instead, it was a round dominated by pre-season title favourites. Chris Middlehurst started race one from the front row and was first at the chequered flag. A solid race two performance which saw him finish second means that Middlehurst leads the championship by 20 points after just one round. 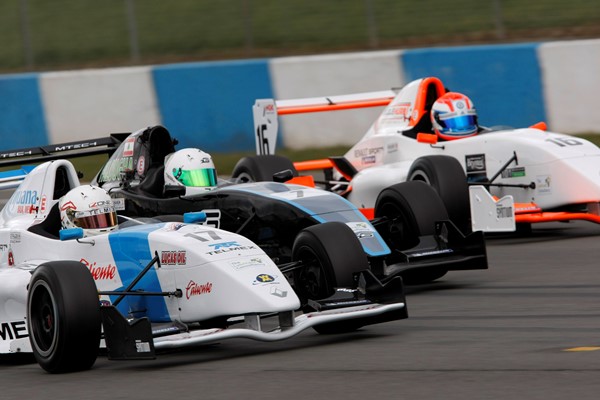 Another MGR man into his second year in the category, Jorge Cevallos did not achieve what he hoped for in race one, crossing the line in 11th, but made up for it with a confident race two win. As such, Cevallos sits in second in the standings, level on points with Joe Ghanem.

The Lebanese driver Ghanem did not finish on the podium in either of the races, despite leading the majority of the first one, but still recorded good points-scoring finishes in fourth and fifth. Meanwhile, Weiron Tan and Ivan Taranov had similar weekends, with third place in races one and two respectively, but one retirement each that ensured a low position in the standings for both drivers.

Series regulars Takamoto Katsuta and Yuichi Nakayama took wins in race one and two respectively at the Japanese F3 season opener at Suzuka. Nakayama started both races from pole, but narrowly lost out to Katsura in race one. In race two, however, he pulled clear of the field to take victory as Katsura finished second. Formula Pilota China race winner Shota Kiyohara rounded out the podium in race one, while it was series veteran Katsumasa Chiyo who took third in race two.

Due to securing pole for both races, it’s Nakayama who leads the championship with 21 points, but Katsura is close enough with 17.

The Swede enjoyed perhaps the most consistently strong weekend of his European F3 career at Silverstone, bouncing back from a disappointing time at Monza to take his place as Marciello’s most likely title challenger with three podium places. As race three proved, beating the Italian could be a different matter though.

Gasly quickest of the bunch on final day of Eurocup testing