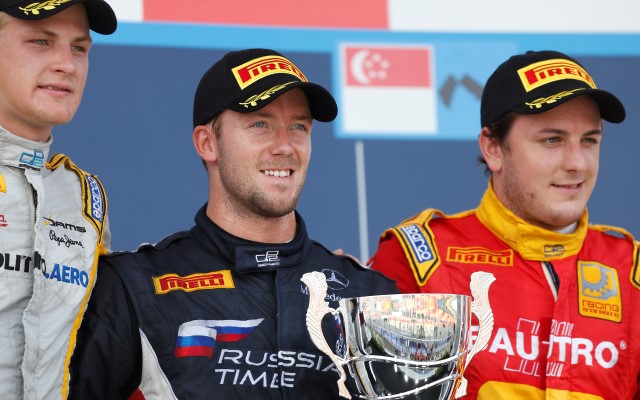 Palmer dominates Friday and Saturday, Bird wins on Sunday to keep up with Leimer

Fabio Leimer and Sam Bird are separated by seven points at the head of the GP2 standings with one weekend remaining. They went to Singapore with the same gap. The weekend started better for the Swiss driver though, qualifying third as Bird could only manage tenth after being impeded by traffic.

As the first of the drivers to run an option-prime tyre strategy in the feature race in order to preserve a prime set for Sunday, Leimer slipped to fifth. Bird recovered from a bad first lap and a poor pitstop to claim eighth and the crucial reverse grid pole position for Sunday. The Briton duly converted pole into an uncontested victory while Leimer moved up from fourth to third to limit his losses.

Jolyon Palmer was the driver to beat for the first part of the weekend, topping practice, qualifying and then taking the feature race win. He had to work for his second victory of the season though, going backwards at the start and having to fight his way back through, catching and overhauling his Carlin team-mate?Felipe Nasr with stronger tyre performance during the latter part of the race. Still win-less in GP2, Nasr finished second with James Calado in third.

A prime-prime strategy left all three drivers struggling on Sunday, finishing down the order after being forced to change tyres mid-race. Nasr and Calado still have a mathematical chance of winning the title in Abu Dhabi at 31 and 45 points adrift, together with Stefano Coletti who is 44 points away after extending his incredible point-less run to 11 of the last 12 races. All three would need disaster to hit both Leimer and Bird at Yas Marina to stand a chance.

After finishing seventh ahead of Bird in the feature race, Marcus Ericsson followed his former iSport team-mate home in the sprint race to claim his fourth top two finish from five weekends. Fellow DAMS driver Stephane Richelmi maintained his impressive consistency with two fourth places, passing Leimer near the end on Saturday and finishing close behind on Sunday.

Next round: Yas Marina, 2-3 November 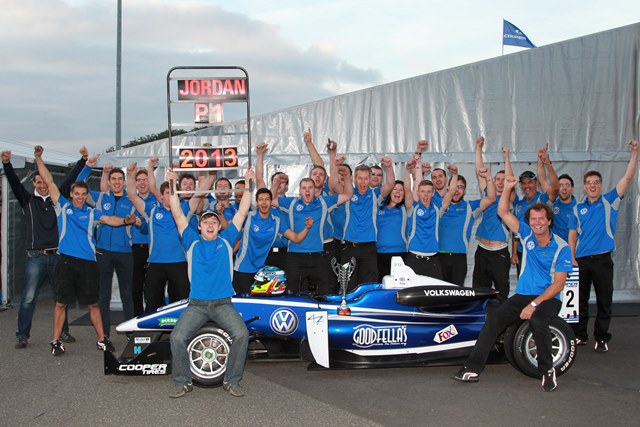 Jordan King had something to celebrate after all three British F3 races in the finale of the shortened series at the Nurburgring. He won race one and race three, in between which he secured the title with a fifth place in race two as chief rival William Buller crashed out.

Buller had finished the first race three laps down after his engine went up in smoke on the grid before managing to join the race. King took a dominant win ahead of Antonio Giovinazzi and Felipe Guimaraes, who then stole the race two win from Spike Goddard at the very last corner. Tatiana Calderon completed the podium that time around.

King proved himself a worthy champion by seeing off the challenge of Buller in race three. Rookie Giovinazzi took third place to secure second spot in the standings by just one point ahead of category veteran Buller.

Having been the dominant force in Formula Abarth this season in his rookie season of cars, Alessio Rovera had a difficult start to the weekend in Misano. He began the first race from pole but fell back to tenth in race one with an apparent mechanical problem. He recovered to fifth in race two before winning the final race after nearest rival Simone Iaquinta was black flagged for forcing a rival onto the grass at the start of the race. The result was enough for Rovera to seal his title with a weekend to spare.

Iaquinta had won race one ahead of Michele Beretta and Dario Orsini, while third year driver Giorgio Roda claimed a maiden win in race two ahead of Sergey Trofimov and Orsini. Orsini was second again in race three with Vitaly Larionov completing the podium.

Report: Iaquinta wins race one at Misano amidst problems for poleman Rovera

Rump turns up and wins to retain joint points lead 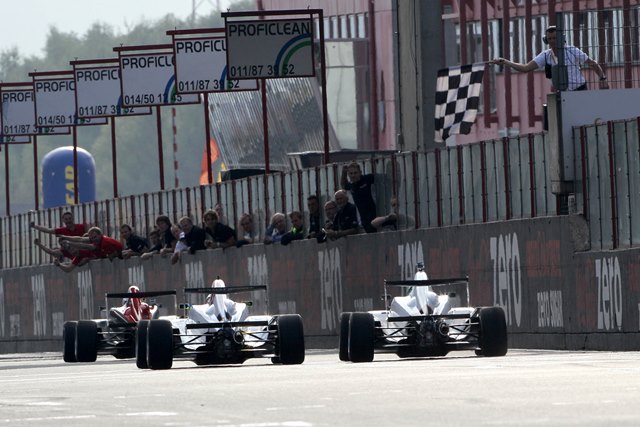 Clashing Formula Renault 1.6 races at Zolder and Mantorp Park affected a number of drivers who have contested races in both categories this season including Martin Rump, a title contender in both. With Rump absent from the NEC qualifying while he contested the Sweden round, nearest rival Roy Geerts took full advantage with pole position. He was beaten to the race one win by Janneau Esmeijer?but was still able to take the championship lead with Rump arriving in Belgium to finish sixth.

Rump fought his way up the order in race two to become a factor in the lead battle between Geerts and Esmeijer, snatching the victory at the end of the very last lap. With Geerts finishing second, he and Rump are now tied for the points lead on 149 points with Esmeijer on 119.

Report: Esmeijer beats Geerts to race one victory at Zolder

Report: Rump wins race two at Zolder from last on the grid

Next round: Nurburgring, 28-29 September

Rump wins here too but Johansson holds on

Rump headed to Zolder after failing in his bid to claim the Swedish title at Mantorp Park. He took the championship lead away from rival Erik Johansson with a dominant win in race one and led the second encounter early on. However, an error saw him finish up fifth, two places behind Johansson who did enough to secure the title by four points.

Julian Santero wrapped up the Formula Renault Argentina title by taking his ninth win of the season in race 12 at General Roca. The 19-year-old’s closest rival Manuel Luque finished second with Felipe Schmauk completing the podium.

Next round: To be confirmed

The F3 rookie proved himself to be a deserving champion with two wins at the Nurburgring.