The bumper weekend of racing in Monaco didn’t produce the best racing we’ll see all season, but as always the tight streets provided a great test of the F1 hopefuls’ talent and bravery…

The FR3.5 drivers were the first ones out onto the circuit on Thursday and were the last of the junior drivers to race on the Sunday morning as the precursor to the Grand Prix. 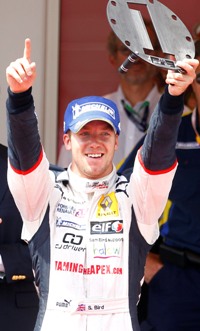 Sam Bird would prove to be the man to beat, topping the free practice session and then claiming a fine pole position on Saturday. With all of the qualifying sessions in Monaco split into two to prevent the issues of traffic, Bird ran in the first session which should certainly have been slower with it being first thing in the morning. He went a second quicker than rival Jules Bianchi, only to then overcook it a bit too much a few seconds later and crash at Ste Devote. Despite the expected track evolution, the second session’s pacesetter Alexander Rossi was still seven tenths shy of Bird’s almighty effort.

The race would become a relentless duel between ex-GP2 drivers Bird and Bianchi, whose experience of the circuit paid off. The pair tore away at the front of the field after Bianchi jumped Rossi at the start, with the gap between the two constantly see-sawing with each punch and counter-punch. Bird successfully held on as they traded fastest laps, Bianchi recognising the chicane on the last lap was his final chance to go for victory and trying a late-braking move that nearly ended in disaster for both. For Bird his victory banished the demons of Monaco 12 months before, when he stalled on pole in GP2.

Rossi finished some 30 seconds down the road, keeping Kevin Korjus behind him. Korjus first made up a place when Kevin Magnussen was forced wide and into the barrier at Ste Devote by Robin Frijns, and then another when Aragon-master Frijns came to a halt with an issue relating to his gear mechanism. Nico Muller took fifth ahead of Marco Sorensen, with season-opener winner Nick Yelloly in seventh and former champion Mikhail Aleshin in eighth.

Bird now heads Frijns by five points in the standings, with no time to rest before they race at the World Series by Renault event at Spa this weekend.

While Bird had been expected to be amongst the leading contenders this weekend, GP2 saw something of a surprising pacesetter in the form of Johnny Cecotto. The Venezuelan had only scored points in two of the 45 races he had previously started in GP2, but stole top spot at the end of practice and then again at the end of qualifying to claim a shock pole position. He successfully kept Marcus Ericsson behind for the duration of the race to win ahead of the Swede, with Caterham man Giedo van der Garde a quiet third.

Points leader Davide Valsecchi only qualified seventh, but made up three spots by stopping later than those ahead of him to finish fourth. Max Chilton had started on the front row after hooking together a fine lap in the first session, but lost out to both Ericsson and van der Garde. He had Luiz Razia and Jolyon Palmer for company during the first stint, but it would be Valsecchi who got past him and relegate him to fifth. Palmer was sixth with title contender Razia losing out badly in the stops and falling to eighth behind Esteban Gutierrez.

That was until Gutierrez came unstuck trying to put a lap on Fabrizio Crestani at the chicane, launching off the kerbs and into the barriers. The Mexican retired while Razia picked up a puncture from his debris. That put the early-stopping James Calado into seventh with local racer Stephane Richelmi in eighth.

It remains to be seen whether Cecotto can regularly beat the likes of van der Garde and Ericsson (Photo: GP2 Media Service)

Richelmi was chasing a home victory from pole in the sprint race but was beaten to the inside line by third-place starter? Palmer, who moved left to help him get around the corner. Richelmi gave him room but this led to contact between Richelmi, Calado and the barrier, sending Richelmi down the escape road and giving Calado a broken front wing. There was worse to come up the hill when Cecotto suffered a puncture after contact at the start, sending him spinning and causing some of those behind to check up. This sent Felipe Nasr up into the air after running into fellow Brazilian Victor Guerin, with a number of other cars also being taken out of the race including a slow-starting Valsecchi.

After the resultant safety car Palmer was able to build up a big lead as Calado suffered with his damage. He was eventually called in with a black and orange flag, releasing Chilton to chase after Palmer. He ran out of laps and had to put up with his fellow Brit claiming his maiden GP2 win before him. Van der Garde made it a double podium-scoring weekend in third ahead of Ericsson, Rodolfo Gonzalez and Razia. Valsecchi leads Razia by 31 points, with Valencia next up.

Young Finn Aaro Vainio had failed to win a race since stepping out of karts at the start of 2010, but he would put that wrong as he returned to the scene of his Monaco Kart Cup victory in 2008. The Lotus GP driver took pole and controlled the first race, finishing ahead of Tamas Pal Kiss and Kevin Ceccon – the only GP3 driver with previous experience of the street circuit after racing there in GP2 last year. David Fumanelli beat teammate Mitch Evans to fourth, with Daniel Abt, Antonio Felix da Costa and Marlon Stockinger completing the points in a processional affair.

Race two provided little more in the way of overtaking. It did start abruptly though when Will Buller ended up up on his side and head first into the barriers after he and fellow Brits Alex Brundle and Alice Powell tried to get through three wide. After a safety car, Stockinger remained in the lead from pole just ahead of Felix da Costa. The race was again interrupted, this time with an even more dramatic incident after Conor Daly went flying into the fencing at the exit of the tunnel after running into the rear-wing-less Dmitry Suranovich, who was defending rigorously despite his damage. Daly got out unscathed, but the damage to the fencing brought an early end to the race.

Stockinger scored his maiden GP3 win ahead of Felix da Costa, Abt, Evans, Fumanelli, Ceccon, Vainio and Tio Ellinas. Vainio heads the points, 11 ahead of expected champion Evans. Valencia’s next for them too.

Luciano Bacheta‘s unbeaten start to 2012 came to an end when Mihai Marinescu beat him to the win in the first of the two Nurburgring races. Christopher Zanella made up a host of places to finish third ahead of Kevin Mirocha, teen sensation Matheo Tuscher and Alex Fontana. Race two saw Zanella come out on top of a race-long duel with Marinescu. Tuscher completed the podium ahead of home racer Markus Pommer and Fontana. Bacheta was only sixth, but maintains a 44 point lead over Zanella in the standings. Spa is next up in four weeks’ time.

Also in action at the ‘Ring was the F3 Open. Belgian Sam Dejonghe won the opening encounter ahead of poleman Gianmarco Raimondo, with Portimao round winner Mans Grenhagen? in third. Race two saw Raimondo successfully convert pole to victory this time around, with Niccolo Schiro second and Facu Regalia third. Raimondo now leads the points, five ahead of Grenhagen. They join F2 again at Spa for round three.

Norman Nato would prove unstoppable at Imola as he surged into the points lead. He turned a double pole position into a double race victory, with fellow Frenchman William Vermont coming home in second place on both occasions. It was an all-French affair on the podium for the first race with Paul-Loup Chatin in third, ahead of Red Bull Junior Daniil Kvyat and Lotus youngster Oscar Tunjo. Red Bull’s Stefan Wackerbauer claimed his first podium in Formula Renault in race two, ahead of Tunjo’s fellow Lotus driver Esteban Ocon. Kvyat and Chatin retired after contact together, which handed Nato a 29 point lead at the head of the standings, with Chatin second and Kvyat a further 23 adrift in third. Round four takes place at Spa, on the same weekend as F2 and F3 Open.

The new season of the championship formerly known as Formula BMW Pacific kicked off with four races at Sepang. The season is expected to be a two-horse race between third-year Malaysian drivers Afiq Yazid and Nabil Jeffri, who finshed second and third overall last year with Yazid only just falling short of the title after winning more races than Lucas Auer.

Jeffri claimed first blood in round one ahead of Yazid, with Jeffri’s rookie South African teammate Aston Hare in third. The top two were running in reverse order in race two until they made contact on the very last corner, Yazid stalling and Jeffri dropping to sixth. That meant that Hare inherited the win ahead of Akash Nandy and Irfan Ilyas second and third.

Jeffri returned to the top step in race three, Yazid losing second when he went off on the first lap. Hare took second, ahead of Danial Hidzir. The fourth and final race Hare started from pole and converted that into a second victory on his first weekend in cars, with Jeffri coming through to second ahead of Nandy. Hare leads Jeffri by five points in the standings, with the series making its first visit to Europe at the very end of June with four races at Paul Ricard in France.

PaddockScout Driver of the Weekend: Sam Bird was unstoppable in Monaco, and even though he crashed after setting a pole lap that was just a sign that he was not afraid to push the limits around the unforgiving street track.