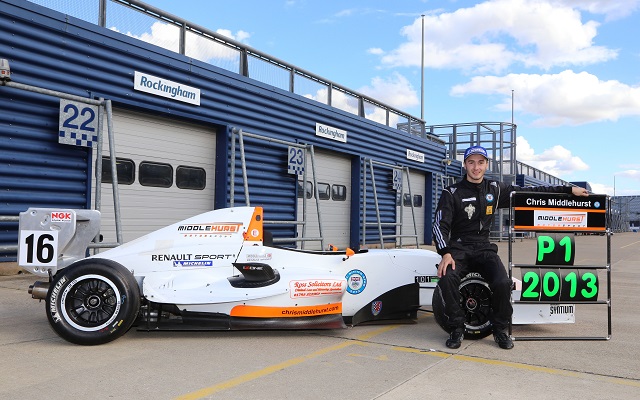 It is, perhaps, quite fitting that Chris Middlehurst‘s title was clinched in the same way that he’s performed all year. Consistency was the name of the game for the 18-year-old Brit this year, as he’s only missed out on the podium once in the 11 races prior to Rockingham. In the penultimate round, Middlehurst made that stat into “once in 14 races”, which will allow him to enter the final round at Silverstone as series champion.

He wasn’t exactly quickest at Rockingham – that honour would, rather undeniably, go to Weiron Tan, who topped both qualifying sessions and, thus, started all three races on pole. He’s led every lap of races one and two, picking up his fourth and fifth victories of the season and keeping himself, at least theoretically, in the championship hunt. He looked set to pull the same trick in race three, but an engine failure intervened and denied him the perfect weekend. 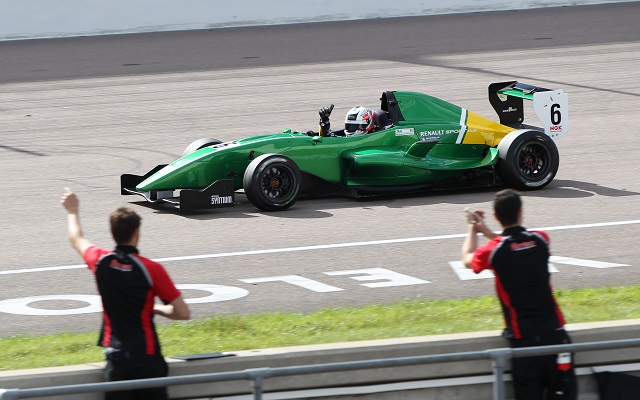 However, even winning race three probably wouldn’t help Tan delay Middlehurst’s celebrations. He minimized the points loss with second in race one, narrowly came third in race two and, when Tan ended up out of race three, Middlehurst used it to secure another second place and wrap up the title.

With the fight between the leading duo taking centre stage, the rest of the field found themselves a bit overlooked, yet some milestone performances didn’t go without notice. Chinese driver Hong Wei Cao finally picked up his first win in the Protyre series after two years of being a regular, as he made the most out of teammate Tan’s retirement. That coupled with Cao’s podium in race one put him within potential reach of third, which, in the standings, is now occupied by Jorge Cevallos who’s had a solid weekend, punctuated with third in the final race. Jake Cook, meanwhile, will rue that very race, as his retirement means that he relinquishes third place in the championship, alas only by three points.

Finally, Fortec’s Sam MacLeod continued to sit way lower than he should in the standings due to a high retirement rate. He didn’t finish race one or race three, but was easily on pace with the title winner, holding him off in for second place in race two.

Report: Tan takes his fifth win in a row in Protyre FR

Next round: Silverstone, September 28-29 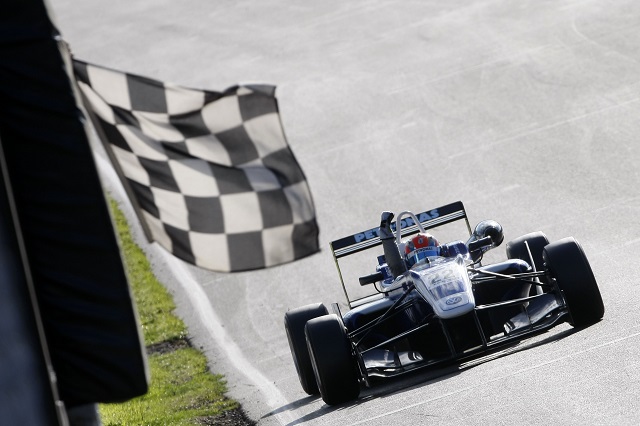 Jazeman Jaafar‘s return to British Formula Three has thrown a bit of a wrench into the three-way fight for the series crown, as the experienced Malaysian looked a lot stronger than the title contenders during round three at Brands Hatch. Taking the count of the series rounds he’s contested with Carlin to a whopping 31, Jaafar expectedly took double pole in qualifying. In both feature races, he’s found himself under a fair bit of pressure, but his lead was never any under real threat, allowing him to add two more victories to the CV. In the reverse-grid outing between his victories, Jaafar’s done a good job to make it to third to eighth place.

Still, even with Jaafar in the mix, the title contenders produced some severely entertaining drives. Carlin’s Jordan King was the star regular of the round, taking the fight to Jaafar in races one and three, but ultimately coming mere seconds behind to take the runner-up spot on the podium. In race two, King also ended up trailing the Malaysian for most of the race, and finished in a decent fourth.

For the two other championship hopefuls, the Brands weekend was far from perfect. Antonio Giovinazzi‘s traditionally looked like the best Double R driver and impressively made it to the podium in the first two races, making the most out of great starts, as well as rivals’ misfortunes. In race three, however, he ended up collecting fellow contender Will Buller early on and retired on the spot.

But, even without the incident, Buller’s weekend was not one to write home about. Both races one and two were compromised for the Briton due to false starts and, in addition to that, race two saw him incur a combined 35 seconds of penalty time for track limits violations – although, lucky for the Brit, the decision was later reversed, granting him the fourth place that he crossed the line in.

Elsewhere, Felipe Guimaraes used his front row start in the reverse-grid race to take his first victory in the series, while Canadian Nicholas Latifi celebrated his maiden podium in the final race of the weekend.

In the National Class, Ed Jones was back to dominating ways, after missing the second round of the series. British F3 didn’t exactly end up welcoming him with open arms at first, as Jones was out of qualifying with a technical problem and then had his first race cut short with the same issue, which allowed class leader Sun Zheng to march to victory unimpeded. Jones did recover in races two and three, beating Zheng in the former and surviving a collision with the Chinese driver in the latter.

In the standings, with just one round to go, King leads Buller by five points with outside hopeful Giovinazzi a further 16 behind. For the National Class, Jones faces the improbable task of making up 40 points to Zheng for the title.

Next round: Nurburgring, 21-22 September 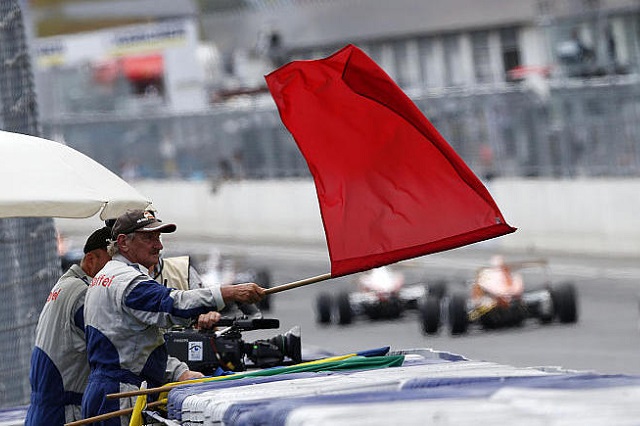 The Spielberg round of ADAC Formel Masters ended up practically mirroring the Nurburgring event a week ago in several aspects. Again, we’ve gotten the same poleman for the two feature races, as well as a similarly hectic reverse-grid race. However, the most crucial for the championship was the continuous and, at this point, predictable dominance of Belgian championship leader Alessio Picariello.

Qualifying in second again, Picariello repeated the same trick we’ve seen at Nurburgring, putting the race leader under pressure early on to put himself in control of the race – in the first one, he’s made the overtake for the lead on lap three, while in race two, he got the job done two laps later. Neither of the races were easy for the Belgian for that point on, as he’s clearly not had the quickest car in race conditions, but Picariello managed to hold all opposition at bay, adding his eighth and ninth victories of the year. In the reverse-grid race, he was an early retirement, damaging his car in an awkward early collision with Jason Kremer, yet that has hardly hurt his standings lead, as he now has 90 points on the nearest competitor.

His teammate, Maximilian Gunther, who happens to be Picariello’s nearest rival in the standings, continued his own pattern from Nurburgring. Again, he spectacularly outqualified the championship leader to take double pole, but in races, he failed to withstand the pressure. Gunther didn’t seem generally comfortable in wheel-to-wheel throughout all three races as he fell down the order to fourth in the first one and didn’t manage to make the move on Picariello in the second one, despite seeming quicker overall. In race three, he was a real victory contender, but was eliminated in an incident that brought out the red flag and ended the hectic event. The results were rolled two laps back, and his podium spot was returned.

Out of the other people chasing Picariello, Schiller’s Kremer looked strong, appearing on the podium in both feature races, nearly taking victory away from Picariello in the first one. In race three, he was compromised by a racing incident with the championship leader, but managed to recover and make the top ten. Meanwhile, Neuhauser driver Nicolas Beer remained in third, but didn’t quite have the best weekend. He made it to the podium in race one, and could’ve done so in race two as well, yet his run was ruined when squeezed a charging Kremer off-track and received a drive through. In race two, the progress he made to take second was undone by the rollback, leaving him in fourth place.

Among the rest of the field, the Lotus drivers looked quite likely to take the fight to the leaders, but things did not go too well for most of them. Mikkel Jensen did well in race two to take fourth, but crashed out in the other two, while Beitske Visser lost a big chunk of her points haul due to a post-race penalty for causing the red flag in the third race. On the other hand, Indy Dontje drove a very smart race three to pick up his second win of the season in an unusual race, which also saw Mucke’s Kim-Luis Schramm get his first podium due to the rollback.

Report: Picariello triumphs in a four-way battle for the win at Spielberg

Next round: Lausitzring, 31 August – 1 September 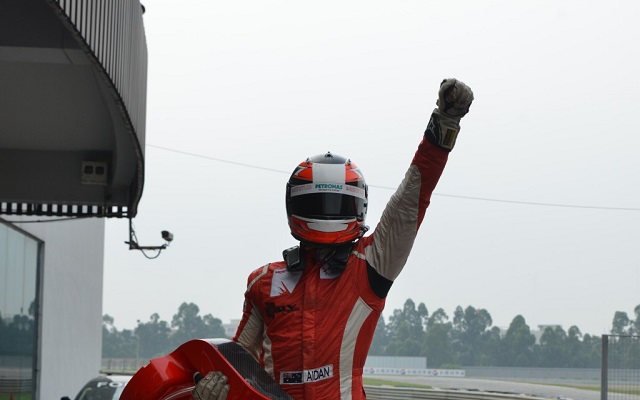 The Formula Masters China round at Inje brought Aidan Wright the best weekend of his car racing career, as he won three out of four races at the Korean autodrome and overtook teammate Afiq Ikhwan in the standigs.

Wright started the first race of the weekend from pole and quickly pulled away from the rest of the field, mastering the rainy conditions. KCMG’s Akash Nandy also seemed right at home with the weather, dicing his way through the field to take second on the final lap, only to have it taken away post-race for overtaking Tanart Sathienthirakul under yellows.? As such, Ikhwan inherited second, with Raj Bharath taking the final podium spot, while Ren Nagabuchi and Sathienthirakul completed the top five.

Due to posting the quickest lap in race one, Bharath lined up on pole in race two. The race, due to rain, began under safety car, and when it went green, the Indian driver almost immediately lost out to Nandy. Another safety car period followed, and, after the restart, it seemed Bharath has retaken the lead, but the overtake he’s made was made illegally, before Nandy crossed the line. Ikhwan made the same mistake further down the field and both drivers were penalized post-race. As such, Nandy, who finished in second, was declared winner, ahead of Sathienthirakul and Wright, with Matthew Solomon and Pu Jun Jin rounding out the top five.

Nandy and Wright continued to be the drivers to beat in race three, with the duo starting on front row. The Malaysian driver held on to the lead in dry conditions and managed to keep first after the restart, but soon finally fell prey to Wright, having to settle for second at the finish line. Solomon scored his first podium in the series in third, with Ikhwan and Nagabuchi taking fourth and fifth respectively.

It was then time for the fourth race, as the series organizers made up for the cancelled event at Ordos. Having topped the second qualifying session back then, Nandy had pole position, and kept the lead off the line, only to tumble down the order with a mechanical issue early on. Ikhwan inherited the lead, but did not have the pace to fend off Wright, who took over on lap seven and secured his third victory of the weekend. Sathienthirakul also passed Ikhwan in the late stages to take second, with the rest of the top five being made up by Bharath and Solomon.

With six races to go, Wright narrowly leads Ikhwan, with Bharath and Nandy reduced to title outsiders in third and fourth.

Despite the fact that Rockingham was the weekend where Middlehurst sealed the title, his main opponent Tan still managed to make a great impression. The Caterham junior was pitch perfect throughout qualifying and carried that form into the races, picking up the victories in the first two. It would’ve been three out of three, too, but the engine gave up on Tan eight laps into the conclusion of his perfect weekend. Hardly his fault and shouldn’t cast any shadows on what was a great display.