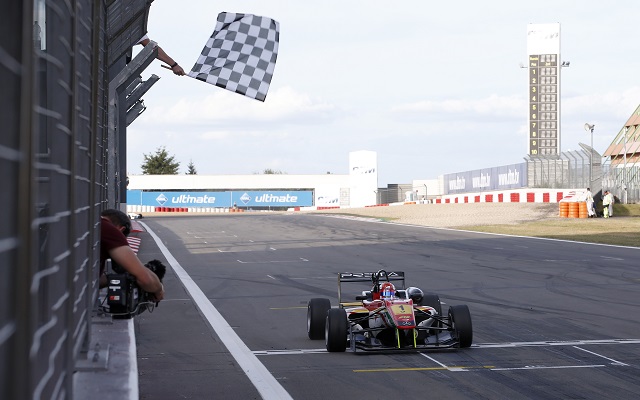 Prema driver Raffaele Marciello has delivered a crucial blow to his opponents in the European F3 title fight, winning all three races of the Nurburgring round…

After a perfect start to the championship, Ferrari junior Raffaele Marciello seemed to have lost a bit of momentum, with the nightmare weekend at Spielberg and the adequate-only performance at Norisring allowing chief rival Felix Rosenqvist to get as close as ever in the standings. As the pressure was surely weighing on him, the Italian was expected to continue the downward trend at Nurburgring.

Instead, the public was treated to complete dominance from the get-go. Marciello kicked off the weekend by topping both practice runs and then was outright untouchable in qualifying, producing two laps good enough for pole in each session. Despite two safety car periods over the three races, he maintained the lead throughout every single lap run by the series this weekend and left Nurburgring with an added 75 points. 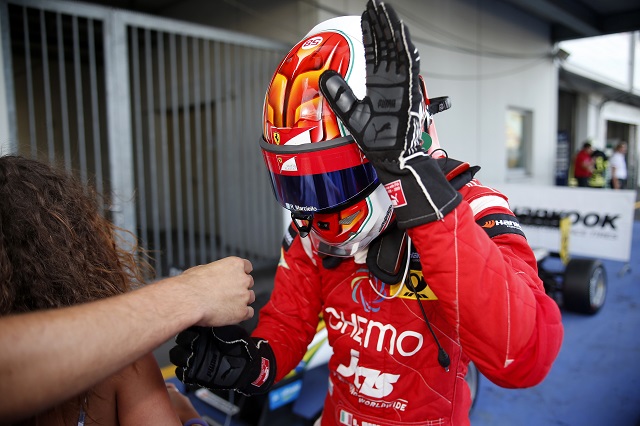 The Prema Powerteam star was in a league of his own at Nurburgring (Photo: FIA F3 / Thomas Suer)

While Rosenqvist himself didn’t look particularly out of form, the improved performance of his teammates at Mucke didn’t seem to have an effect on his results. He qualified well, as usual, and cruised to third in race one. In race two, however, starting on the front row, he made a mistake and momentarily stalled his car, which sent him to the back of the pack. The Swede has put in a lot of effort fighting through the field and made it back into the points, but ultimately came up noticeably short of what he’d hoped for. An underwhelming fifth followed in race three, and, overall, with nine races to go, Rosenqvist now sits 72.5 points adrift of the championship leader.

The best of the rest in the standings ? teammates Lucas Auer and Alex Lynn ? were both rather overshadowed by Marciello. Still, Lucas had a noticeable edge over Alex, placing ahead of him in all three races and finally overtaking the Brit in the standings after race three, where Auer placed second.

Nurburgring also saw two drivers score their first podiums in the series in 2013. Fortec’s Pipo Derani finally found his feet, looking very strong throughout the weekend, which resulted in him picking up a second-place finish and a third-place finish ? both better than his previous personal best in the championship. T-Sport’s Alexander Sims was also a pleasant surprise, albeit a more expected one, as he also made two podium appearances, generally looking closest to Marciello on overall pace throughout the weekend. Finally, Jordan King of Carlin came very close to adding to his sole podium of the season, but ultimately ended up one place short in both races one and two.

Report: Marciello strolls to race one victory at Nurburgring

Next round: Zandvoort, September 28-29 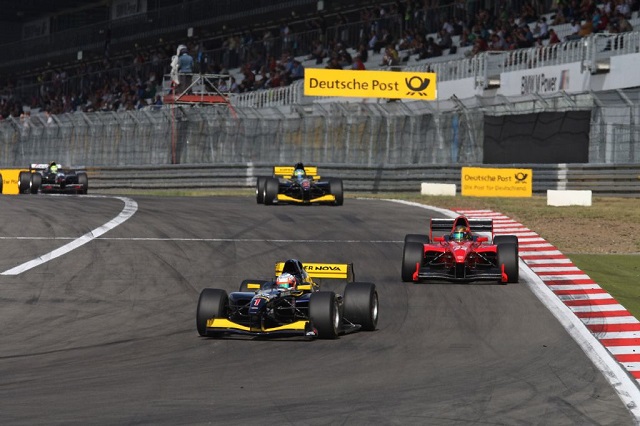 Karthikeyan continued to make up ground in the standings, scoring his third win (Photo: Auto GP)

Narain Karthikeyan continued to demonstrate the benefits of his mid-season switch to Super Nova with another strong performance that has now made him as an outside possibility for the title.

The Indian continued to be unbeatable in qualifying ever since joining the British squad, as he scored his third pole position in a row. He had little trouble turning that into a third victory in the series and, while a turn one incident in race two saw him only manage fifth, he’s now a respectable 42 points adrift of the championship leader with two rounds to go and 48 available in a given round.

That championship leader is now Kimiya Sato, as the Japanese driver has managed to outscore main rival Sergio Campana in both races. He’s kept out of trouble in race one, securing fourth after a beneficial pitstop strategy, and then fought his way to the lead in the reverse-grid race, taking his fourth win of the year.

While Campana had a fairly anonymous weekend, finishing in the points but outside of the top three on both occasions, his compatriot Vittorio Ghirelli fared much better. Benefiting from the strong form of the Super Nova squad, Ghirelli picked up third in race one and then went one better in the reverse-grid outing. Having also picked up the point for the fastest lap in both races, he now sits only 12 points behind Sato and a point ahead of Campana.

Kevin Giovesi, racing his third round in the series after he was ousted from the Venezuela GP squad in GP2, was Karthikeyan’s main worry in race one, but ultimately found himself finishing in second place. Race two only yielded a solitary point, but if you have to bet on someone scoring their first victory in Auto GP in the last two rounds of 2013, the F3 Open Copa champion is still your man.

Finally, Manor MP’s team leader Daniel de Jong secure the team’s third podium his year in the reverse-grid race, having wisely managed to stay out of trouble during the first lap scraps.

Report: Sato storms away to race victory at the N?rburgring

Next round: Donington, 31 August – 1 September 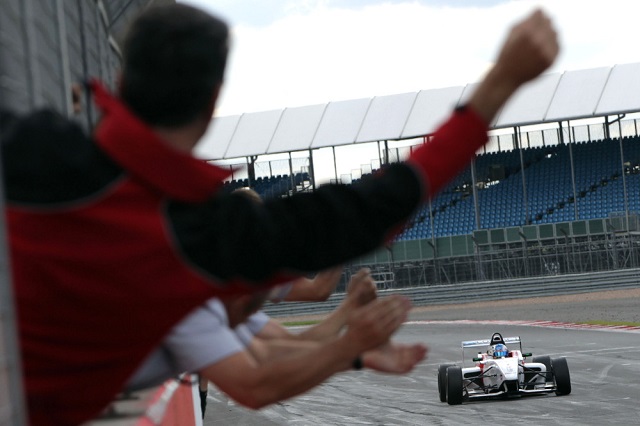 With Hughes increasing his lead to 34 points, it seems F4 has finally found its title favorite (Photo: BRDC F4)

The hectic nature of the title contest in BRDC F4 finally seems to have settled down into a fight between series leader Jake Hughes and his main pursuers. The second Silverstone round of the year saw Hughes score second in race one, prevailing in a difficult fight for the spot against Charlie Robertson. He was rather quiet in race two, but made the most out of pole in race three, finishing the weekend with an increased 34-point cushion over his nearest rival.

However, there was perhaps one man who eclipsed Hughes. Sean Walkinshaw Racing’s Matthew Graham overcame Hughes in qualifying and promptly proceeded to run away from the rest of the field in race one, taking his second victory of the year. He did well in the second race to take fifth and in race three was briefly into the lead, jumping Hughes off the line, but ultimately lost out and settled for second place. In two rounds, Graham was gone from tenth in the standings to fourth and now, with just as many rounds to go, has an outside shot at the crown.

However, for now Graham won’t be Hughes’ biggest concern. Hillspeed’s Seb Morris remains the biggest rival for the Lanan Racing driver, despite him not figuring among the ten different race-winners this year. Morris had a consistent enough round at Silverstone, but only a sole podium finish means that he’s dropped a number of points in relation to Hughes.

Just five points behind Morris, Jack Barlow also has a very realistic chance of troubling Hughes, having produced a stellar display at Silverstone with two fourth-place finishes and a reverse-grid race podium.

Of those who now occupy the ranks of title outsiders, Robertson had a great weekend, punctuated with another podium finish to add to his CV, while Jake Dalton had a rather miserable time, with a best finish of sixth and a retirement. The final driver within 100 points off of Hughes ? Ross Gunn ? is currently seventh, having picked up his second series win in the reverse-grid race.

Finally, the weekend saw the first podium finish for privateer James Greenway, who profited from a strong race one to take third in the reverse-grid outing.

After dominating the qualifying session, championship leader Rodolfo Camarillo had little trouble converting pole position into a race victory, running completely unopposed in race one at Queretaro. Formula Abarth regular Luis Michael Dorrbecker was best of the rest, taking second on his series debut, while one of Camarillo’s title rivals, Jorge Bas, rounded out the podium. With Pablo Sanchez fourth and Javier Echeverria fifth, title contender Giancarlo Vecchi found himself outside of the top five, finishing an underwhelming sixth.

In the reverse-grid race two, Camarillo found himself out of the race, having come together with Sanchez early on. Reverse-grid polesitter Sebastian Ordonez enjoyed a rather calm cruise to race victory, his first in Panam GP, with maiden podium finisher Echeverria and Bas rounding out the top three. Vecchi left Queretaro without a podium finish, taking fourth in race two ahead of Kevin Hernandez, with guest Dorrbecker taking sixth place.

In the standings, Camarillo now enjoys a comfortable cushion of 30 points over Vecchi, despite his retirement in race one. Bas, Sanchez and Ordonez are all within proximity and, with four rounds to go, could all still potentially challenge for the title.

He’s topped both practice sessions, both qualifying sessions and has led all three races lights-to-flag. There is simply nothing Marciello could’ve done better this weekend.

Frijns steps in for Lancaster at Spa