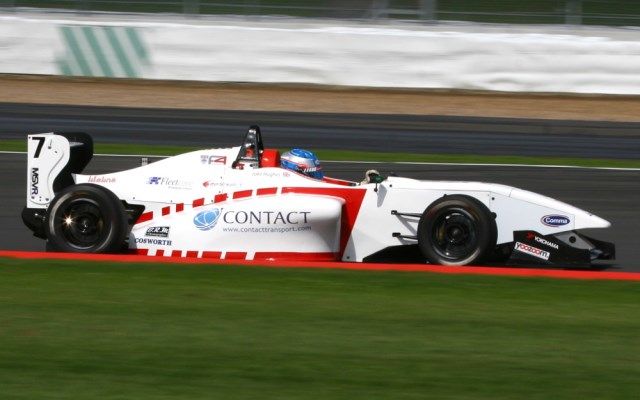 Jake Hughes has extended his BRDC Formula 4 points lead with two weekends remaining after recovering from a poor start to win the third and final race of the Silverstone round.

Race one winner Matthew Graham got the jump on pole-sitter Hughes at the start, but the Lanan Racing driver returned to the lead with a pass around the outside of Brooklands on lap three.

From there Hughes ran away into the distance, finishing 6.8 seconds clear of Graham.

“I didn’t make the best of starts and Matty got the jump on me going into Copse,” said Hughes. “For the first two laps he was defending really well and I couldn’t get past him, and I felt it was always going to be an outside move somewhere. I managed to pull it off at Brooklands and then put my head down for a few laps and pulled out a gap.”

The result moves Hughes 34 points clear of nearest rival Seb Morris, who managed to finish the race in third despite losing front bodywork in a challenge for the lead on lap three. He crucially kept Jack Barlow behind, which meant he holds onto his second place spot in the championship.

Charlie Robertson fell from third to fifth in the early laps and stayed there until the finish. HHC team-mate Raoul Hyman finished one place behind with a pass on Struan Moore on the penultimate lap.

Race two victor Ross Gunn finished where he started in eighth, but only after regaining spots he lost on the opening lap. MGR’s Latin American duo Diego Menchaca and Pietro Fittipaldi finished quiet weekends by completing the top ten. The team’s other driver Jake Dalton started back in 14th and, after making up some ground, fell back to 15th by the flag leaving him 69 points adrift of Hughes in the points race.

Sato storms away to race victory at the N?rburgring