International drivers had won all nine races in the Toyota Racing Series coming to event four at Hampton Downs, but it was home favourite Nick Cassidy who led the standings. With GP3 champion Mitch Evans turning up this weekend before flying back to Europe, there was a good chance of some local success at last.

Evans wasted no time getting back up to speed as he topped both segments of qualifying, narrowly seeing off the efforts of Brits Jann Mardenborough and Alex Lynn.

Race one began in dramatic fashion as Mardenborough was collected by Bruno Bonifacio, bringing out the red flags. After the restart, Evans led Lynn to victory, while Pipo Derani completed the podium in third. Cassidy finished in fourth, crucially overtaking chief title rival Lucas Auer to extend his points lead.

Cassidy was handed the perfect opportunity to grab his first victory of 2013 when the reverse grid draw put him on pole position for race two. He made the most of it with an unchallenged drive to the win, four seconds ahead of Derani. Auer made a late move on Evans to take third ahead of Lynn and Mardenborough.

The 20-lap feature race for the New Zealand Motor Cup started and finished in similar style to race one. Another opening lap collision involving Mardenborough stopped the race, the GT Academy ace the culprit this time as he ran into impressive series debutant Ignazio D’Agosto. Evans and Lynn again enjoyed a close race after that, but the former succeeded in his aim for the weekend of taking the main prize. Cassidy made the podium in third, but Auer limited the damage by coming through to fourth despite having to take the restart from the pits. Tanart Sathienthirakul and Andrew Tang rounded out the top six, both recording their best TRS finishes to date.

Cassidy now has a 32 point lead over Auer ahead of next weekend’s season finale at Manfeild, where the Kiwi will also try to defend his New Zealand Grand Prix title in the feature race. Lynn is within 52 points. 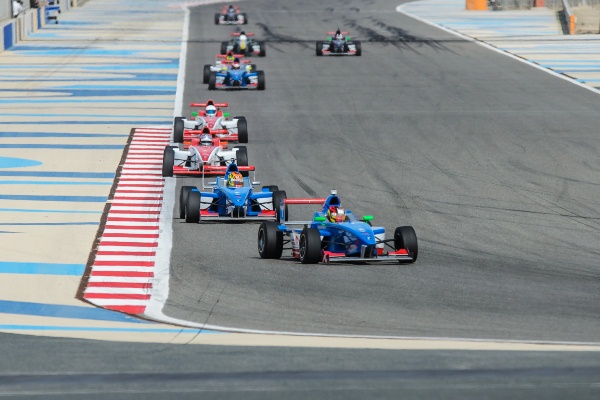 A new championship for the old Formula BMWs kicked off this weekend in Bahrain. At the head of a ten-car field made up mostly of local racers were European F3 ace Emil Bernstorff, JK Racing Asia Series runner-up Nabil Jeffri and former Italian Formula Renault 2.0 competitor Tomasso Menchini.

Bernstorff was the man to beat, heading Jeffri at the finish of Friday’s two races by six and 11 seconds respectively. Menchini had qualified ahead of the Malaysian but failed to complete the opening lap in race one before receiving a drive-through for a jump start in race two, restricting him to a fifth place finish. Third and fourth in both races were cousins Raed Raffii and Faisal Raffii, usually more accustomed to racing V8 Supercars at their local track.

Saturday was a similar story, Bernstorff taking two more dominant victories over Jeffri with the Raffiis as the best of the rest. Menchini was absent, presumably bemoaning his misfortune on Friday or claiming foul play.

Report: Bernstorff continues his domination in races three and four at Bahrain International

The next round takes place at Yas Marina in Abu Dhabi in two weeks’ time.

PaddockScout Driver of the Weekend: Mitch Evans – Showed his class against some high quality opposition, despite his comparative rustiness having not raced since September.

Next weekend: The TRS title is decided at Manfeild and the MRF Challenge concludes in Madras.