Marvin Kirchhofer continues to show his class and march towards the German F3 title ahead of his more experienced Lotus team-mates. At the fourth round at the Sachsenring, he topped qualifying for the third time this season. He converted those two poles in races one and three into his fifth and sixth wins of the year, the second of those in commanding fashion. Combined with a second place in race two, he moves on to 223 points in the standings, 68 ahead of his nearest rival.

That nearest rival is Artem Markelov. The second year driver’s consistency is admirable, with three more podiums this weekend meaning he has now finished all but one of the 11 races on the podium, like Kirchhofer. But unlike Kirchhofer, he is still yet to win this year. On the other hand, the third of the Lotus drivers Emil Bernstorff scored his third win of the season from sixth on the grid in a wet race two, but his weekend was marred by his sixth non-podium finish of the year in race three as a first-lap clash saw him come home in tenth. That result leaves him 20 points adrift of Markelov.

Fourth-placed John Bryant-Meisner had a woeful weekend, the Performance Racing dirver scoring just a single point for eighth in race two as he failed to get off the grid in race one and retired in race three, allowing the Lotus trio to escape in the standings. Team-mate Thomas Jager added two retirements to a fourth place in race one, while the team’s third driver Yannick Mettler was absent through budget issues.

In the Trophy class, Sebastian Balthasar starred. He missed out on the class win in race one to Hubertus-Carlos Vier, but made the most of reverse grid pole position in race two to finish a fine fourth outright in difficult conditions before managing a fifth in race three.

Report: Bernstorff charges through the field to win race two at the Sachsenring

Coming to the third round of the season at the Sachsenring, Alessio Picariello had won all four of the standard non-reverse-grid races this season, and looked good to do the same again when he claimed two poles and took off into the lead of the first race. However, he was handed a drive-through penalty for not respecting yellow flags, promoting Mucke team-mate Hendrik Grapp into the lead. Picariello did win race two, strengthening his championship lead.

That was helped by nearest rival Jason Kremer only managing a best weekend result of third in the rain-shortened final race after a fourth and a sixth in the earlier two races. That leaves him 48 points behind Picariello and only three ahead of Grapp, who was fifth in race two and second in race three.

Red Bull Junior Beitske Visser was the winner in race three. The weekend began as a continuation of the frustrating season so far for her and Callan O’Keeffe, qualifying 11th and 12th respectively and both finishing the first race further back. A race two crash?when Ralph Boschung came back on track and hit O’Keeffe, causing him to roll through the gravel, stopped him from scoring points all weekend. Visser went forwards in race two thanks to starting on wets, spending much of the race in P3 until dropping back to seventh as the track dried. Visser and O’Keeffe are back in ninth and tenth in the standings respectively.

Report: Grapp takes first win of the season in race one at the Sachsenring

Report: Picariello and Visser pick up Sunday wins at Sachsenring

Bonifacio and Ghiotto win at Spa to stop Fuoco running away 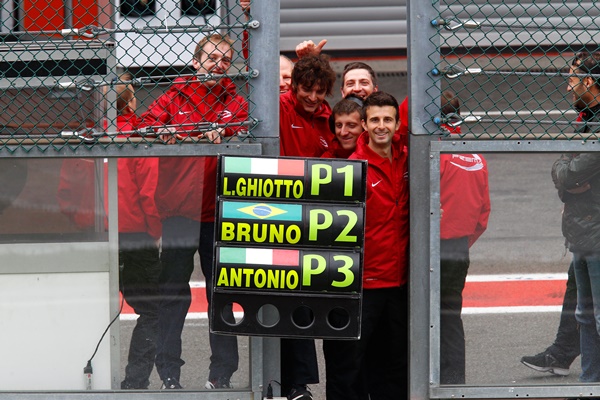 The battle for this year’s Formula Renault 2.0 Alps title is quickly turning into a fight between Prema’s three drivers. Ferrari protege Antonio Fuoco had starred in the earlier two rounds, winning three of his first four car races, but at Spa-Francorchamps, his more experienced team-mates Bruno Bonifacio and Luca Ghiotto fought back with a win each.

Bonifacio won race one from pole ahead of Fuoco, but the latter was later penalised, after he was involved in a first lap crash that put Ghiotto and Egor Orudzhev out of the race. Jakub Dalewski and?Kevin Jorg picked up the final podium spots.

In race two, Ghiotto bounced back to beat Bonifacio to the win, with Fuoco taking the final podium spot. Despite scoring considerably fewer points than Bonifacio over the weekend, Fuoco keeps his standings lead on 108 points with Bonifacio on 95. Ghiotto is third on 69 after a quieter start to the season. Pierre Gasly has slipped to fourth after skipping the Spa round.

Report: Grapp takes first win of the season in race one at the Sachsenring

Report: Picariello and Visser pick up Sunday wins at Sachsenring

Hubert stretches away with Spa treble

Anthoine Hubert is looking hard to beat in French F4 this year and was at his most dominant yet at Spa-Francorchamps. At the earlier two rounds he won the first and third races of the weekend, but in Belgium he went one better and one all three. While races one and three were won in straightforward fashion from pole position, race two was won from all the way back in tenth on the reverse grid.

He now has 199 points, with his nearest rival Simo Muhonen on 73.5 after the Finn was second to Hubert in race three. Estonian Tristan Viidas claimed three top-four finishes so is only 3.5 points behind Muhonen in what is likely to be nothing more than a battle for second.

Dan Cammish extended his unbeaten start to the Formula Ford season to 12 races with three more victories at the Oulton Park round, but rookie Harrison Scott emerged as the man most likely to stop the runaway championship leader’s run.

Scott actually took the lead from Cammish at the start of the weekend’s second race but unfortunately his start was found to be too good and he was given a drive-through penalty. He had run third in the earlier race behind Cammish’s JTR team-mate Sam Brabham before breaking his suspension when he clipped tyres at the chicane. He finished second to Cammish in the third race.

Nico Maranzana inherited Scott’s podium spot in the first race and added a fifth and a ninth (in a depleted nine-car field) to now sit two points ahead of Scott in the battle for P2 in the championship. South African Jayde Kruger netted two podium finishes on his debut on British soil.

Report: Cammish ahead of Scott and Kruger in final Oulton race

An exemplary performance in the wet and the dry from the French ace at Spa, particularly coming from tenth to first in race two in just a handful of laps. The French F4 title battle is a forgone conclusion on that form, so we look forward to seeing what he can do in Formula Renault 2.0 next year.