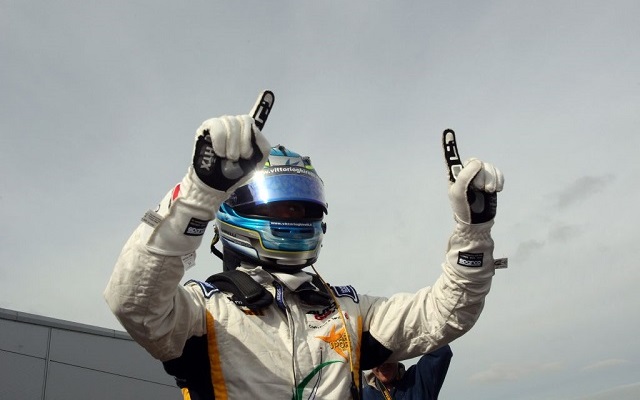 The Auto GP round at Donington marks a crucial point in the title fight, while, over at Lausitz, both leaders of German championships suffer drawbacks…

While two drivers have almost exclusively fought for the lead in the standings for all of the Auto GP season pre-Donington, the British round, which marked the penultimate outing of this year’s championship, saw a third contestant take the initiative. The man in question is Super Nova’s Vittorio Ghirelli, who went from third into first in the points table during one weekend.

The British squad was, once again, the quickest in qualifying, with Ghirelli taking yet another front row grid spot, as teammate Narain Karthikeyan lined up on pole. The Italian’s start was far from perfect, with him losing a spot on the opening lap, but after Ghirelli took back second, he found himself in prime position to challenge for the race win. As Karthikeyan stopped early and went through a severe drop in pace, Ghirelli took to the pits in the closing stages of the race and emerged comfortably in the lead, taking his first feature race victory in Auto GP. In race two, he’s made another bad start, but an early stop allowed him to cruise to fourth place.

Ghirelli’s points lead was made possible by the two usual leaders, Kimiya Sato and Sergio Campana, having rather disappointing weekends. Campana was off the pace for both of the races, finishing fifth and sixth respectively. Meanwhile, Sato, despite a muted qualifying, looked rather strong in race one due to a distinct strategy, but made a mistake mid-race, putting his car into the gravel, which marked the end of his drive. Having recovered some positions in race two, Sato now sits 11 points behind Ghirelli, with Campana a further six down. 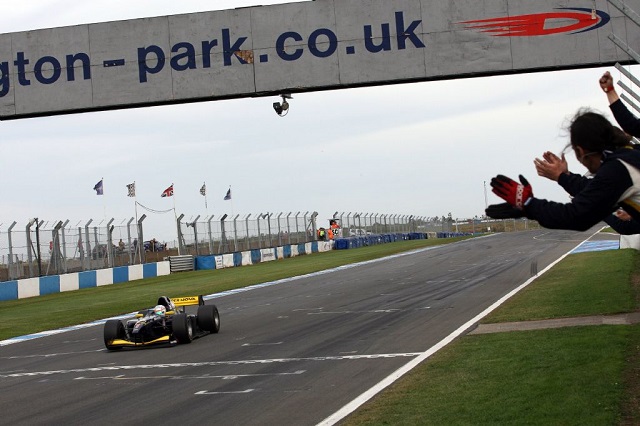 However, the list of potential title contenders for the final round at Brno doesn’t run out with Ghirelli, Sato and Campana. Karthikeyan, having taken his fourth pole position since joining Super Nova, would later clinch his fourth victory of the year in the reverse-grid race. His stellar weekend sees him in fourth in the standings, just four points down on Campana and 21 behind Ghirelli.

As usual, part-timer Kevin Giovesi was the best of the rest, finishing third in both races, with the Italian still seeking his first victory in the series. Meanwhile, Manor MP’s Meindert van Buuren converted his reverse-grid pole into his first podium in the Auto GP series. 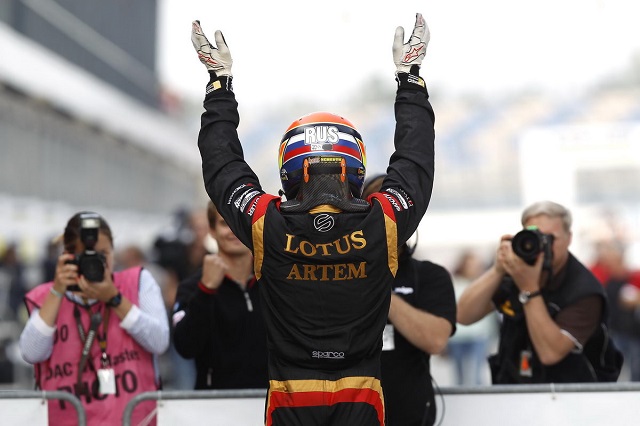 After 15 podium finishes in 2013, Markelov finally took his first win of the year (Photo: German F3)

Championship leader Marvin Kirchhofer might not have gotten the weekend he’d hoped for at Lausitzring, but, despite the setbacks, the Motopark driver still managed to have a stellar round, getting him one step closer to sealing the series title.

As usual, Kirchhofer was the quickest man on-track in qualifying, putting in two laps good enough for pole position. However, his car failed post-race inspection, and the German was demoted to the back of the grid for both races one and three. Despite that, the Motopark car was good enough for him to make it to the podium in race one, while, in the reverse-grid race, he took victory after the leading duo ahead of him took each other out of the race. Starting from last in race three, he went one better than the weekend opener, methodically picking off the opponents to take second, only narrowly missing out on the race win.

However, despite Kirchhofer’s best efforts, his lead over nearest rival Artem Markelov decreased. The Russian himself put in the best weekend of his German F3 career, which started off with him converting a front row start into his long-anticipated first victory of 2013. He benefited from incidents up the road to finish second in race two, and narrowly held off Kirchhofer for victory in race three. He now trails the German by 96 points, but, with 69 available per weekend and two rounds left, it seems the next round will still end up being the title decider.

Finally, Emil Bernstorff was the only man from the Motopark trio to have a rather terrible weekend at Lausitz. He’s inherited double pole after Kirchhofer’s exclusion, but, when it came to the races, everything seemed to go wrong. He lost out to Markelov off the start in race one, leading the Brit to settle for second. In the reverse-grid race, he was fighting John Bryant-Meisner for the lead when the Swede ended up running wide out of a corner, emerging on track sideways and slamming into Bernstorff. Finally, in race three, the Brit was sabotaged by traffic, which cost him several positions and, ultimately, a podium finish. As a result of all that, Bernstorff is now 30 points adrift of Markelov.

The usual suspects reigned among the rest of the field. Bryant-Meisner picked up a podium finish in race three, Gustavo Menezes recorded three fourth-place results and Matteo Cairoli made the most out of a reverse-grid pole position to take his first top three finish in the series. In the Trophy class, Sebastian Balthasar made another step to securing the title with two wins, but his retirement in race two gave his teammate Freddy Killensberger the chance to claw back some points.

Next round: Oschersleben, September 14-15 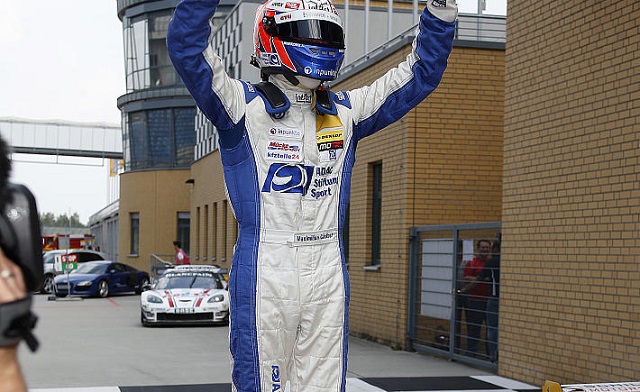 Mucke driver Maximilian Gunther was once again the top man in ADAC Formel Masters qualifying, taking double pole at Lausitzring, yet this time he’s managed to convert both of those into a race victory.

In race one, the German ascended the top spot of the podium for the first time in 2013, narrowly beating out championship leader Alessio Picariello. Jason Kremer came out victorious in a fight for third, with Nicolas Beer taking fourth and Red Bull junior driver Beitske Visser rounding out the top five.

While Gunther fared great from pole, he couldn’t make much headway from the reverse-grid eighth place, unlike his teammate Picariello. While reverse-grid poleman Stefan Riener slipped behind Fabian Schiller at the start and tailed him for the majority of the race, Picariello started picking off opponents one-by-one, before coming to a stop behind Boschung. A collision into the final corner followed between the duo and led to the race being red-flagged. The results were rolled back a lap – Schiller took his first victory, Riener was second, Boschung got to keep third, Picariello was denied fourth with a post-race penalty and Gunther was only seventh.

Still, despite ending up beaten by his teammate at Lausitz, Picariello looks rather comfortable in the title fight, with two rounds to go and a 72-point cushion over Gunther. Only 65 points are available in a given round, so the title could be called next time around at Slovakia Ring.

Next round: Slovakia Ring, September 14-15 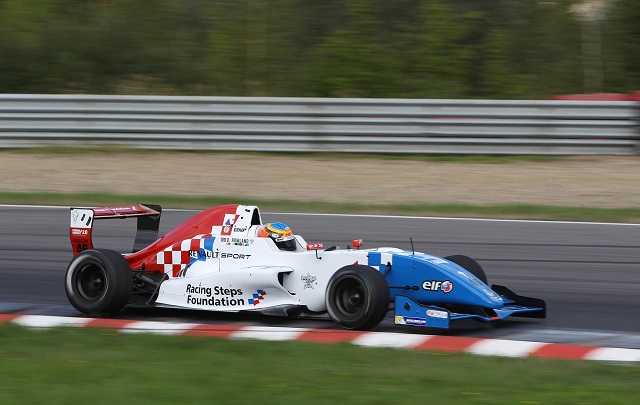 Caterham junior Matt Parry was poised to finally wrap up the Formula Renault 2.0 NEC during the penultimate round at Most, but, as main championship rival Jack Aitken scored well and Parry himself had a nightmare of a time, the official coronation will have to wait until Zandvoort.

Indeed, Lady Luck was not on Parry’s side at Most, as he failed to finish any of the three races of the weekend in the points. In race one, he didn’t complete one lap; in race two, he made a false start and was subsequently penalized; in race three, his charge up the field was undone by a puncture.

On the contrary, Aitken had one of his best weekends in the series, driving on-pace with a number of Eurocup regulars that attended the Most round. He took fourth after a great start in race one and went one better in race two, climbing the podium for the fifth time this year. The reverse-grid race saw Aitken lose lots of track position, but he managed to recover to 12th, ensuring that he leaves Most with a theoretical, if unrealistically slim, shot at the title.

The aforementioned Eurocup regulars were the ones who ran the show this weekend. Manor MP’s Oliver Rowland starred, taking double pole and then cruising to two race victories, with third in the reverse-grid race to round out a great weekend. Lotus juniors Esteban Ocon, Oscar Tunjo and Alex Albon all finished second at some point in the weekend, while Josef Kaufmann Racing drivers Steijn Schothorst and Gustav Malja delivered the team a reverse-grid victory and a podium finish respectively.

Report: Rowland doubles up at Most in second NEC race 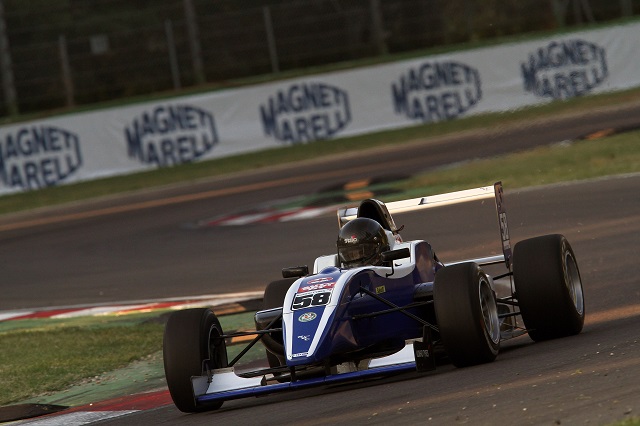 A great weekend from Orsini saw him outscore the championship leader over three races (Photo: CSAI-ACI)

The Imola weekend of Formula Abarth racing saw Alessio Rovera take yet another step towards securing the championship title.

Having maintained his perfect qualifying record (with another double pole), the Italian cruised to race one victory as his main rivals, Simone Iaquinta and Michele Beretta, were both severely impeded by on-track incidents. With the duo absent from the top six, it was Dario Orsini who picked up second with National Trophy driver Sergey Trofimov securing third.

Orsini and Rovera continued to star in the reverse-grid race, with the NBC Group driver taking just one lap to take the lead from fifth on the grid. Orsini then eased to victory, Rovera fought his way up to second, while his teammate Giorgio Roda completed the podium. Iaquinta took fourth, as Beretta recorded another retirement.

Rovera’s excellent weekend was a bit undermined by him stalling from pole in race three, which allowed Orsini to snatch the lead and record his second victory in one day. Beretta made up for a terrible weekend up to that point by taking second, keeping a recovering Rovera at bay for the closing stages of the race. Iaquinta, having picked up a drive through, was only seventh yet again.

Rovera leads Beretta by 79 points in the standings, with Iaquinta one point behind the latter. With 58 points available in a given weekend, the championship leader could seal the deal in the upcoming penultimate round of the series.

Next round: Misano, September 22

There were lots of standout performances across different categories from the likes of Rowland, Kirchhofer, Markelov and others, but the Mucke driver deserves a special mention. Maximilian Gunther has truly emerged as a brilliant qualifier in ADAC Formel Masters this year, but now he finally has a much-deserved race win to show for it. His reverse-grid performance was a little muted, but a double victory in the feature runs more than makes up for that.