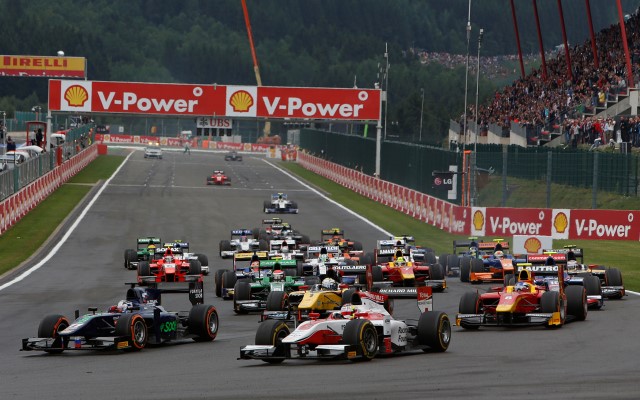 Bird and Calado win races and Leimer scores well as Coletti and Nasr stumble at Spa-Francorchamps, meaning the top five are now separated by just 24 points with three weekends remaining…

Sam Bird added an untroubled win in the Spa feature race to his victories at two other prestigious tracks this year, Monaco and Silverstone. A strategy of prime-prime in the feature race led to him falling backwards out of the points to 14th in the sprint race, but his pole and win were enough to bring him within 14 points of the championship lead with three weekends remaining. More of the same will give him a real chance of winning the title in the maiden season for the Russian Time team.

James Calado ran second in the early laps of the feature race but fell down the order with a very slow pitstop from his ART crew. He was able to rescue eighth place and the reverse grid pole position for Sunday. A good start gave him an early advantage but he lacked speed and gradually slipped into the clutches of Julian Leal as the race wore on. Calado managed to hold on, recording his first win since Hockenheim last year. The result moves him into within a win of the points lead, ten behind Bird. If he can be on the pace over the remaining races, he can be a serious threat in the title race.

Fabio Leimer hasn’t won since Bahrain, but in Belgium he continued his consistent form of late. A fourth and a fifth gave him his seventh top-five finish from the last eight races. Now he’s just seven points off the lead, maintaining such results could be enough even if he can’t repeat his early-season form.

At the other end of the consistency scale, Stefano Coletti came to Spa with just one points finish from the past six races. Things got off to a bad start when he qualified 20th, blaming a puncture. He made up good ground during his opening stint and was in the frame for a points finish. A slow stop set him back a little and he was then hit from behind by Dani Clos, eventually finishing down in 13th. He surged up to fifth on the first lap of the sprint race but had to pit off his option tyres halfway through, dropping him to the rear. 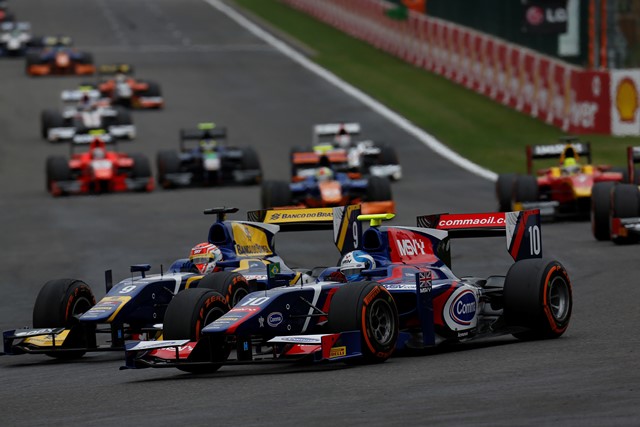 Despite another point-less weekend, Coletti lost just one of the six points he had in hand over closest rival Felipe Nasr. The Brazilian qualified an uncharacteristically low tenth but was making his way up the order until an ambitious dive on his team-mate Jolyon Palmer at La Source went wrong and caused his retirement. As usual when Nasr ends up down the order he fought back to claim the final point, although only after Tom Dillmann was penalised for cutting the final chicane when under attack from Nasr.

Outside of the five title contenders, Marcus Ericsson followed his win in the Nurburgring feature race and second in Hungary with another second at Spa, ahead of Alexander Rossi who finally returned to the podium for the first time since his debut in Bahrain. In the sprint race Adrian Quaife-Hobbs proved he’s got more than just budget after he forced Robin Frijns out at Hilmer in Hungary by finishing third on the tail of Calado and Leal having gone forward from tenth on the grid. Frijns returned this weekend in the team’s other seat but, after finishing one spot ahead of Quaife-Hobbs on Saturday, lasted just one lap on Sunday before his driveshaft failed.

Next round: Monza, 7/8 September

Facu Regalia is the surprise GP3 points leader with two weekends to go thanks to two third-place finishes at Spa. ART team-mate Conor Daly similarly notched up his fourth and fifth top-three finishes of the year with a pair of second places in Belgium. That moves into the American into second in the standings, 14 points behind Regalia. 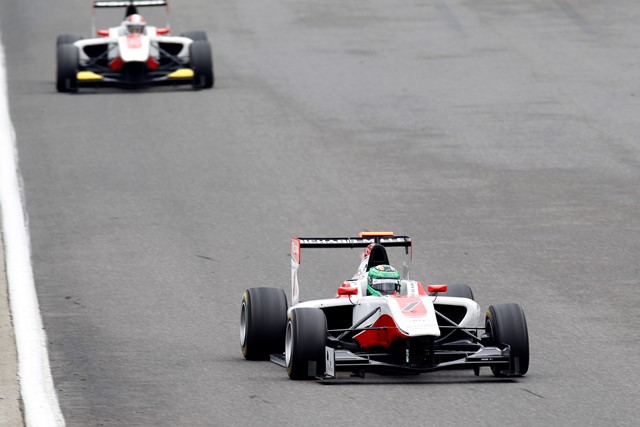 Double podiums for Regalia (chasing) and Daly have put them in pole position in the title race (Photo: Alastair Staley/GP3 Media Service)

The ART pair took advantage of a pretty miserable weekend for Tio Ellinas. The Cypriot had qualified a reasonable-enough fifth but struggled to get away at the start and fell down the order. He did however produce a superb fightback to claim eighth place and the reverse grid pole for Sunday. This time he got a good launch and led the field down to La Source. However, Melville McKee was trying to make up for a poor getaway from alongside on the front row and locked up his brakes, careering into Ellinas and giving the Marussia man terminal damage. He’s now 20 points in arrears of Regalia with two weekends left.

Daniil Kvyat took a maiden GP3 win in race one after jumping pole-sitter and Red Bull stable-mate Carlos Sainz at the start. Added to a sixth in race two, Kvyat is up to fifth in the points, five behind Kevin Korjus (fourth and fifth in the two Spa races) and seven behind Ellinas.

Sainz was running third on Saturday until Jack Harvey managed to turn what should have been a straightforward overtake into Les Combes into a catastrophic accident from which he was able to escape unharmed. A double retirement however drops him to seventh in the points, still tied with Aaro Vainio who also failed to score after a puncture in race one and a last-lap clash with Luis Sa Silva in race two that led to a grid penalty for Monza.

Alexander Sims was a late replacement at Carlin for Eric Lichtenstein, who was withdrawn by his backers Velociudad after results had failed to match their unrealistic expectations. After beating Carlin regular Nick Yelloly to fifth in race one, he took advantage of the Ellinas-McKee collision to comfortably win race two.

Report: Sims benefits from McKee taking out Ellinas to win for Carlin

Next round: Monza, 7/8 September

Maranzana gives Cammish a run for his money in Scotland 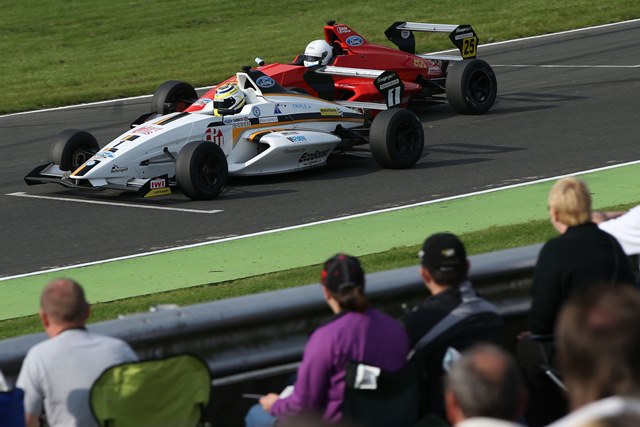 Dan Cammish was denied a pole position for only the second time this season at Knockhill when Nico Maranzana managed a quicker second-fastest time. After Cammish had seen off the Argentine rookie’s challenge in race one, he was given his hardest race of the season in race two. Maranzana made a good start and opened up a two second gap, but Cammish was able to reel him back in. They twice switched positions before Cammish got the move done when Maranzana went off. Cammish led from the front again in race three to extend his unbeaten run to 21 races.

He will seal the title next time out at Rockingham if he can maintain his current advantage over Maranzana, whose second-place in race three moved him ahead of Harrison Scott in the fight for the runner-up spot. Scott has been the nearest man to Cammish over the past few meetings but was less competitive north of the border and had to do make do with a third, a fourth and a fifth. Sam Brabham and Jayde Kruger made the podium in his absences.

Report: Cammish gets back to dominating in third Knockhill race

Next round: Rockingham, 14/15 September

Bruno Etman claimed overall victory in the first of the F3 Sudamericana races at Curitiba in his 2001-spec B class car, leading from start to finish. Raphael Raucci finished second to bag full points for the A class and extend his championship lead. Etman’s nearest B class rival Artur Fortunato was third.

British F3 regular Felipe Guimaraes was eliminated in a first corner clash but bounced back to win race two. Raucci finished second, giving him a 17 point lead over Guimaraes in the championship. 15-year-old Fortunato completed a double overall podium.

Next round: Brasilia, 28/29 September 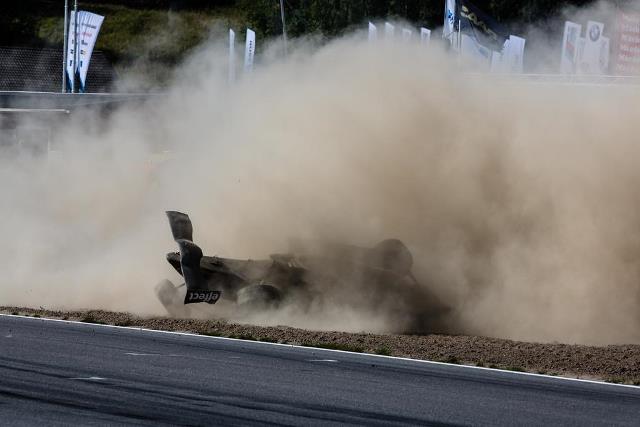 Johansson got away from this with just some gravel in his mouth and his points lead intact (Photo: STCC)

Paul Blomqvist, younger brother of FIA F3 European Championship racer Tom, scored his first win in cars in the first race at Karlskoga.?Martin Rump?had been due to start from pole but had to start from the pits, effectively promoting Blomqvist to pole. Lukas Sundahl finished second before going on to win race two ahead of Blomqvist.

Kevin Aabol?completed the race one podium ahead of points leader Erik Johansson, who then rolled out of race two after contact with Pontus Fredricsson. After eventually retiring from race one, Rump came through to finish third in race two. With one weekend remaining, Johansson retains the points lead, with Sundahl and Rump both 12 points behind.

Next round: Mantorp Park, 20/21 September

A pair of second-places has significantly boosted the American’s title hopes. He might have been in a position to challenge for the win in race two from seventh on the grid had he not been stuck behind the damaged McKee until he served his penalty.