Young Brit wraps up second title from as many years in single-seaters, as Josh Hill and Yu Kanamaru claim final race wins of the season at Spa-Francorchamps…

Jake Dennis arrived at the final round of the Formula Renault 2.0 Northern European Cup with one hand on the championship trophy, as British rival Jordan King had to win both races to overhaul the 55 point gap coming into the final weekend. Any chances of that happening were all but over after qualifying, where King struggled to 21st and 17th in the two sessions having lost practice running due to a collision with a teammate.

16-year-old Finnish karting graduate Mikko Pakari was the star of qualifying, taking a double pole. He led the first race initially and during an early red flag period, before falling to third on lap three behind Fortec teammates Josh Hill and Dennis. That’s how it remained until the eighth and final lap, when Dennis collided with Pakari as they fought over second as the Brit struggled to slow down due to a gearbox glitch. Hill notched up the fifth win of his campaign, while Alessio Picariello inherited second and Bruno Bonifacio third on his second weekend in Formula Renault after his debut at last weekend’s Alps event at Mugello.

Bonifacio’s fellow Brazilian Gabriel Casagrande took fourth ahead of Shahaan Engineer, Kevin Kleveros and Leopold Ringbom. After starring in the latest episode of McLaren animation ‘Tooned’ that aired before this morning’s Korean Grand Prix, Nyck de Vries started fifth but fell outside of the top ten as he fought with Ed Jones before recovering to eighth at the flag ahead of Meindert van Buuren and Andrea Pizzitola.

King made progress but only as far as 12th, meaning Dennis had become champion despite his first non-finish of the season. The 17-year-old Racing Steps Foundation driver claimed three victories and eight other podium finishes from the 20 races in his first season in Formula Renault. Last year he won the Intersteps title in the UK in his rookie campaign in cars, while the year before he was the CIK-FIA U18 World Karting Champion. Another year in Formula Renault could be on the cards in 2013, this time in the Eurocup. F3 could be a possibility, but he sits behind current Eurocup frontrunner Oliver Rowland in the RSF talent queue and it’s hard to imagine they will want to run both in F3 against each other. 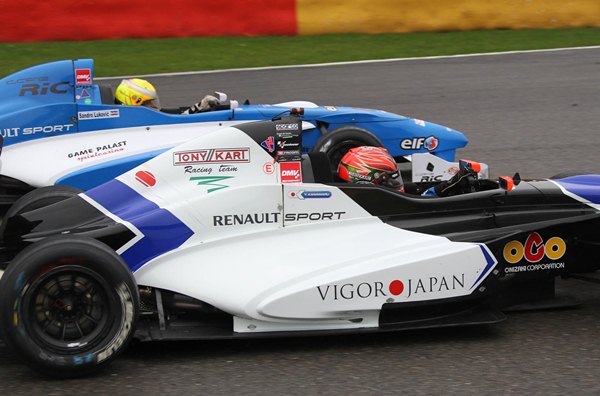 There was still the matter of the final race of the season to be settled, and this one took place in the wet. With some drivers on wets and some on slicks it was Japanese rookie Yu Kanamaru who coped the best after qualifying 24th, claiming victory and significantly bettering his previous best result of seventh. KTR teammate Victor Colome put in a similarly giantkilling performance to take second, while privateer Sandro Lukovic finished third in his first major race weekend since 2010. Victor Bouveng, Frank Suntjens and Gustavo Lima completed a rather unusual top six, while Dennis was the first of the slick runners home in seventh ahead of Picariello, Steijn Schothorst and Jakub Smiechowski.

Hill was 12th and King 25th, but that was enough for King to hold on to second place in the final standings behind Dennis in a British 1-2-3. Dutchmen and Formula Ford graduates Jeroen Slaghekke and Schothorst were the best of the rest after promising rookie campaigns, with car racing rookies Engineer and Casagrande also doing well, sandwiching veteran Kleveros in positions six to eight. Five-time winner Stoffel Vandoorne and de Vries rounded out the top ten with strong points hauls from their part-campaigns.

PaddockScout Driver of the Weekend: Pretty much impossible to determine who this should go to, so we’ll give it to Josh Hill by default for winning the ‘normal’ first encounter.

Next weekend: Mega competitive Formula Renault 3.5 and Eurocup Formula Renault 2.0 championships will be decided at Barcelona, while the Euro Series and FIA European F3 titles will be secured at the Hockenheim finale.