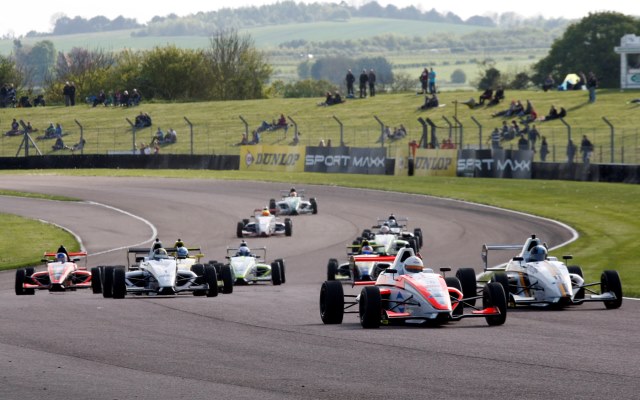 Juan Rosso scored his first win of the Formula Ford GB season with a controlled drive in race two at Thruxton.

The Argentinian began the race from the reverse grid pole position after his fifth-place finish in race one. He was challenged by fellow front-row starter Max Marshall initially but was soon able to pull away up front to lead by 3.5 seconds going onto the last lap before easing off as he took the chequered flag.

Marshall spent the race defending from Harrison Scott and others behind him but held on to claim second. Scott was close with a few laps left but was made to settle for third.

Race one winner Sam Brabham was fourth for most of the race and had a look at overtaking Scott when the Falcon driver had closed on Marshall, but Brabham ended up compromising himself and losing a place to Ashley Sutton, who followed up his earlier third place finish with a fourth on his Jamun debut.

Jayde Kruger came through from the back of the grid to sixth, but was already too far away from the pack ahead once he had cleared the car of Connor Mills. Rosso’s Radical Motorsport team-mate James Abbott fell back as far as ninth early on but fought his way back to seventh, close to Kruger.