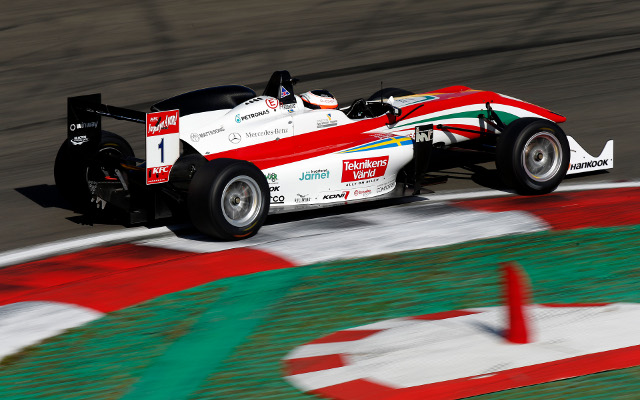 Felix Rosenqvist won the first FIA Formula 3 European Championship race of the weekend at the Nurburgring to extend his points lead, as Nick Cassidy and Callum Ilott claimed maiden podiums.

As Rosenqvist led away from pole position things got close behind, with Charles Leclerc making contact with Jake Dennis at Turn 1 and forcing the Briton into the pits with damage.

Rosenqvist’s closest title rival Antonio Giovinazzi was also caught up and forced wide, dropping him outside of the points.

Up front, Rosenqvist gradually extended his lead over the course of the race, finishing up over six seconds clear.

In his second of his two-round stint with Prema, Cassidy was able to convert his front row start into a P2 finish, although he wasn’t able to escape from impressive Red Bull Junior Ilott.

Front wing damage meant that fourth-placed Leclerc had a serious lack of pace, and finished almost half a minute behind Ilott.

But despite having a queue of cars behind him for the entire race, it wasn’t until the final couple of corners that Leclerc was really challenged by Mikkel Jensen, and by then it was too little, too late.

Giovinazzi claimed a single point with an opportunistic pass on Sergio Sette Camara at Turn 4 for 10th place.

Some action was provided courtesy of a scrap for 12th won by Alex Albon, who as usual this season had George Russell for close company.

Russell had been the only driver close to Rosenqvist in qualifying but lost all three of his front-row starts to 10-place grid penalties for an engine change. Starting 12th, he ended up 13th after falling behind Albon.