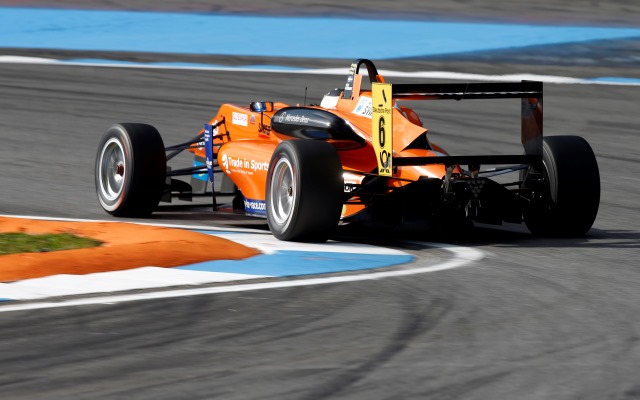 Felix Rosenqvist beat his title rival Raffaele Marciello off the line to win the first FIA F3 European Championship race at Hockenheim and remain in a mathematical chance of winning the championship.

Marciello started on pole position but Rosenqvist was able to pull alongside and then take the lead down the inside of the first corner.

The Swede was able to quickly put a comfortable margin between himself and his Italian adversary, winning the race by 5.9 seconds. As a result he has closed the points gap to Marciello to 38.5 points. With 25 points available for a win, fourth place in race two will be enough for Marciello to wrap up the title. He will start second on the grid behind Rosenqvist.

In a largely processional race, one eventful moment came in the battle for third. Alex Lynn stalked Harry Tincknell in the early stages before making an overly ambitious move at the hairpin. The door was closed by Tincknell and the pair interlocked wheels, both running wide and Lynn emerging ahead.

Sven Muller however took advantage to move past the battling Brits and score his first podium of the season, following his switch from Ma-Con to Van Amersfoort Racing.