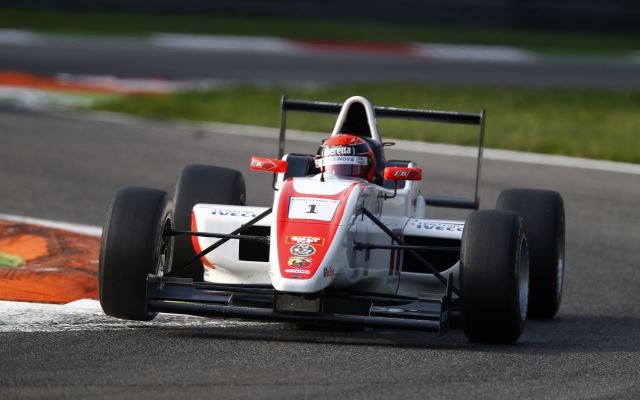 Michele Beretta and Simone Iaquinta scored a pole position each in qualifying for the final round of Formula Abarth at Monza, as champion Alessio Rovera failed to set a time in either session due to mechanical problems.

Iaquinta had finished the first segment of qualifying with the best time but then had it taken away from him for setting the lap under yellow flags.

That meant that Beretta inherited his first pole of the year, the Euronova driver going 0.084 seconds faster than Iaquinta’s best legitimate time.

Vitaly Larionov was the best of the rest in third, six tenths of a second off the pace with fellow Russians Denis Nagulin and Sergey Trofimov?close behind.

Iaquinta was 0.584 seconds faster than Beretta in second qualifying, with his pole position allowed to stay this time.

Orsini claimed third, missing out on a front row spot by just nine thousandths of a second. Perullo took fourth with F3 Open regular Nagulin beating his compatriots to take fifth ahead of Trofimov and Larionov.

Rovera, who topped the first nine of this season’s 12 qualifying sessions, will have to start both races from the back. He went out towards the end of the first session but his car stopped, preventing him from setting a time in either session.

Qualifying one – race one grid