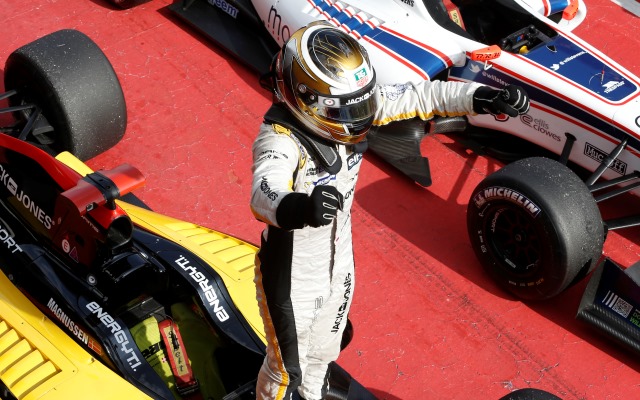 McLaren junior Kevin Magnussen has sealed the Formula Renault 3.5 2013 championship with a win in the penultimate race of the season at Catalunya.

The Dane maintained his lead off the line and then held on to it after the restart, which took place after a 15-minute safety car period.

The safety vehicle emerged on-track during the opening lap, following a series of collisions in the first few corners, including one where Nigel Melker ended up tipping Marco Sorensen‘s car over. The raggedness of the drivers would echo later on in the race as well, when Nikolay Martsenko lost the car during an overtaking attempt, ending the day for Mikhail Aleshin and Christopher Zanella.

Following the restart, Magnussen led the remainder of the race, albeit coming under some pressure from an on-pace Will Stevens. The Briton got especially close to first when the DAMS driver ran wide in the closing stages, but the intrigue was short-lived, as Magnussen controlled the race from that point on.

Benefiting from numerous retirements, Zoel Amberg took his career-best finish in the series with sixth place. The same milestone was achieved by Matias Laine, who crossed the line in seventh.