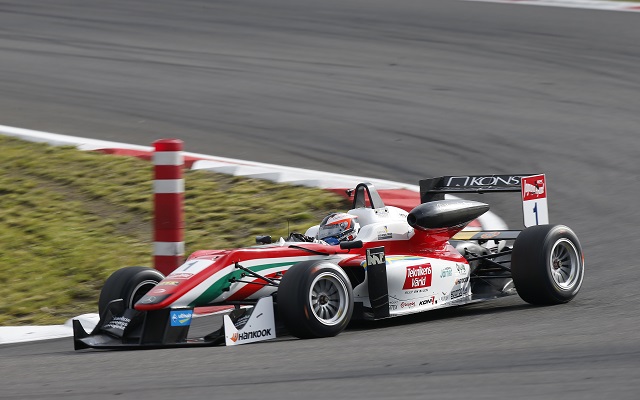 Felix Rosenqvist won again in the second FIA F3 European Championship race of the weekend at the Nurburgring, though rival Antonio Giovinazzi?stole second to limit the damage.

After an aborted start, polesitter Rosenqvist made a fine getaway to the race and survived two safety car periods before pulling away to win by almost five seconds.

Giovinazzi made an aggressive start from fourth on the grid to challenge Lance Stroll and Jake Dennis into Turn 1, going around the outside of Dennis at Turn 2.

Things got feisty down the order too, and the first safety car was required when Alessio Lorandi and Nabil Jeffri collided at the first corner fighting over 12th place.

The second came straight after the restart, when Gustavo Menezes went straight on into the gravel trap at the same place

At that second restart, Giovinazzi made an opportunistic move at the final corner to take second place away from Stroll.

The Italian returned to the podium for the first time since Spielberg at the start of August, but couldn’t keep up with Rosenqvist and saw his standings deficit to the Swede increase to 65.5 points.

That means that should Rosenqvist convert pole into victory again in Sunday’s race three, Giovinazzi must finish second (from P3 on the grid) to take the title fight to the final round at Hockenheim.

Stroll notched up his fourth podium in the space of seven races ahead of Dennis and Charles Leclerc.

Dennis’ title chances are now mathematically over, while Leclerc must outscore Rosenqvist on Sunday to keep his hopes alive.

The Monegasque driver has at least now wrapped up the rookie title after finishing ahead of George Russell, who took eighth from 12th on the grid after losing his front-row starting position to an engine-change penalty.

He and Carlin team-mate Callum Ilott were involved in battles with Mucke pairing Santino Ferrucci and Mikkel Jensen – Ferrucci held off Russell in the end for seventh behind Nick Cassidy, with Ilott beating Jensen to ninth after the Dane lost out to the two British teenagers at the first restart.