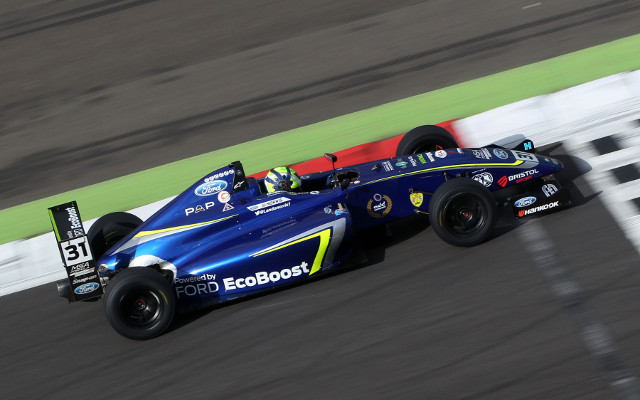 Lando Norris strengthened his MSA Formula championship lead with victory in the opening race of the weekend at Silverstone, leading Colton Herta in a Carlin one-two.

The Brazilian then locked up and went deep at Becketts, dropping him to fourth behind Herta and Toby Sowery.

Herta remained close to Norris for the duration of the 20-minute race and got close to launching an overtake, but had to settle for second at the flag, four tenths behind.

In his second event with the MBM Motorsport team, MSV F3 Cup and MRF Challenge champion Sowery scored his first podium in the series ahead of Leist.

Norris’ title rival Ricky Collard was unable to make progress from fifth on the grid, with the gap between the two now 32 points.

Dan Ticktum had a quiet run to sixth, but that was enough to move him back to third in the standings ahead of Sennan Fielding, who worked his way through from 11th on the grid to finish seventh.

He had Dan Baybutt, Sandy Mitchell and James Pull for close company behind him at the flag.