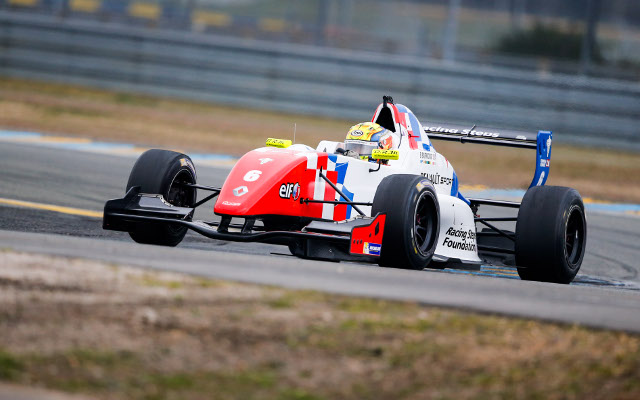 Lining up third on the grid, the Fortec driver was first to cross the line after the opening lap after overtakes on front-row starters Louis Deletraz and Kevin Jorg.

Josef Kaufmann Racing team-mates Deletraz and Jorg had been side-by-side into the chicane for the first time and after going off track, Deletraz gave the place back to Jorg but Barnicoat took advantage to steal the lead.

Although Barnicoat was not quite able to pull away from Jorg, the gap between the duo stayed at around a second throughout the entire race.

It was a more eventful race for Deletraz though, who had to withstand race-long pressure from Jack Aitken with the Briton going side-by-side several times but ultimately unable to make a move.

Ignazio D’Agosto inherited eighth following the retirements of Jake Hughes, who pulled off after losing a wheel, and Matevos Isaakyan, who damaged his front wing following an overly ambitious dive on Olsen.

The top ten was completed by Fortec duo Valentin Hasse-Clot and Martin Kodric.

Deletraz continues to hold on to his championship lead, which is now only two points ahead of Jorg and a further nine ahead of Aitken.