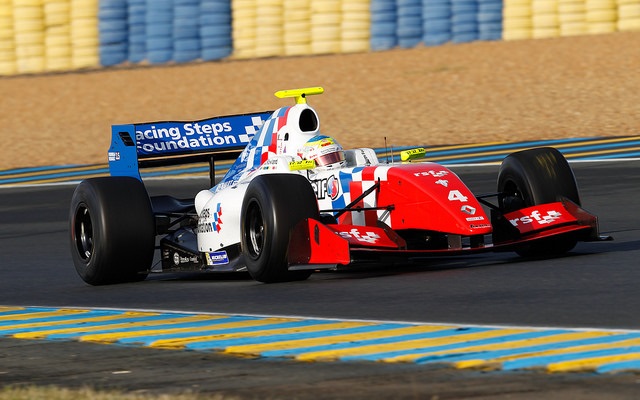 Oliver Rowland won the first Formula Renault 3.5 race of the weekend at Le Mans and moved within one point of sealing the title after a penalty for Matthieu Vaxiviere.

Vaxiviere crossed the line in second place after a battle with Rowland, but had 10 seconds added to his race time for repeatedly leaving the track.

That dropped him to 10th, and means Rowland’s lead is up to 74 points with 75 remaining from the final three races.

Rowland led from pole position ahead of fellow front-row starter Egor Orudzhev, while Vaxiviere battled with Tom Dillmann over third, with both drivers going off track at the Dunlop chicane.

Vaxiviere moved ahead of Orudzhev at the same place at the start of lap three, but he cut across the second of the chicane to complete the move.

The Lotus driver then caught up with Rowland, and there was contact between the two heading into the right-hand kink prior to the first chicane, with Vaxiviere losing his right-hand front-wing endplate against the back of Rowland’s rear-left tyre.

That damage slowed Vaxiviere and put him back into the clutches of Orudzhev. The Russian dived down the inside at the first chicane and Vaxiviere maintained the position by cutting the chicane once more.

For that, the Frenchman was investigated and given a warning for ‘leaving the track repeatedly’.

Soon afterwards, Orudzhev tried the same move again and Vaxiviere used the same technique to defend the position, earning him his 10-second penalty.

While this was going on, Rowland was able to escape and claim his seventh win of the season with a final margin of four seconds.

With Vaxiviere’s time penalty, Orudzhev inherited second place and his first podium since his Hungaroring win in June.

Dillmann was close behind in third, with his first rostrum visit since Monaco in May, while Dean Stoneman took fourth.

Aurelien Panis scored his best FR3.5 result to date in fifth place while Yu Kanamaru had an impressive third race in the category with Pons, finishing just seven seconds off the winner in sixth and ahead of Nyck de Vries.

Roy Nissany was eighth and Tio Ellinas ninth after a slow getaway from fifth on the grid. The Cypriot ended up a second ahead of Vaxiviere, who in turn had a three-second margin over the second Strakka car of?Gustav Malja as he claimed the point he needed to take the title race onto Sunday.