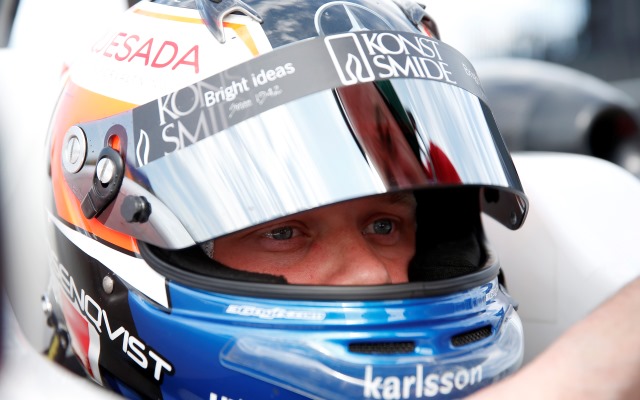 Last year’s winner Rosenqvist was the first driver to get a time on the board and led the session from there.

After spending the middle part of the session in the pits, the Swede returned to the track to increase the margin between himself and rival Antonio Giovinazzi to a quarter of a second.

After crashing in practice, car racing rookie Ilott was showing well throughout the session and then, after going quickest of all in the middle sector, moved up to second quickest in the final minute.

He was just 0.084 seconds off Rosenqvist, but the veteran replied by pulling out a gap of eight tenths on his final lap.

Giovinazzi took third after pitting before the end, while Sam MacLeod claimed a surprise fourth at the finish for West-Tec.

2011 winner Dani Juncadella recovered from difficulties in practice to take fifth for Fortec ahead of Motopark’s Markus Pommer, who ran as high as third.

After all four Japanese entries made the top 10 in practice, experienced B-Max campaigner Yuhi Sekiguchi was the sole representative this time after taking seventh on his last lap.

That put him ahead of Mikkel Jensen, who sat third during the middle of the session for Mucke Motorsport.

Gustavo Menezes and Alexander Sims made the top 10 before the end, forcing Charles Leclerc to settle for 11th.

Behind Yu Kanamaru was Lance Stroll, with the other Prema driver Jake Dennis 16th after his puncture-induced practice crash.

He was behind European series team-mates Arjun Maini and Alessio Lorandi, who both had spells inside the top 10, as did fellow rookie Dorian Boccolacci in 17th.

The TOM’s pairing of Kenta Yamashita and Nick Cassidy wound up 18th and 20th, either side of Mucke’s Santino Ferrucci.

It was a remarkably clean session, with the only incident of note being Sergio Sette Camara coming to a halt at Donna Maria late on.

The drivers will have a second chance to qualify on Friday, with the best times from the two sessions counting towards the grid for the qualification race.