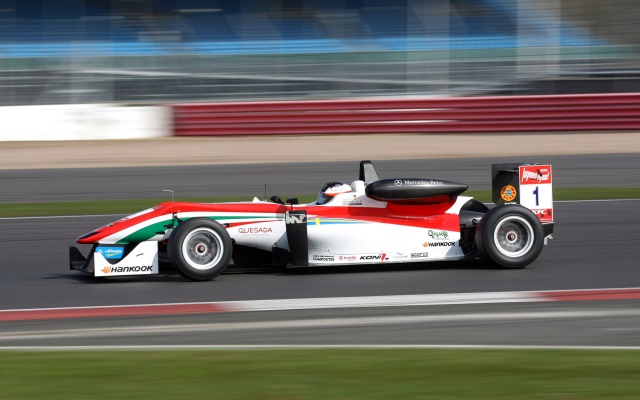 Felix Rosenqvist claimed victory in a first race of the 2015 FIA F3 European Championship that was punctuated by three safety car periods.

Morning rain meant the circuit was damp and although the drivers started on slick tyres, the race began with two laps behind the safety car.

At the restart there was chaos before the drivers even got to the line. Charles Leclerc attempt to put a move on George Russell into Vale but the pair made contact that dropped both down the order.

Brandon Maisano spun trying to avoid them and stalled, while Kang Ling also later arrived on the scene backwards after contact from another car.

There was another clash in the same place at the second restart involving Ryan Tveter and Arjun Maini, with both cars retiring.

The third safety car was necessitated when Alessio Lorandi‘s car racing debut ended in the gravel trap at Luffield.

Rosenqvist had built a three-second lead over Antonio Giovinazzi at that point, but held on in the final part of the race to win by just under a second.

Alex Albon avoided the start melee to take fourth and the honours of best rookie for the returning Signature team.

German F3 champion Markus Pommer was fifth ahead of Lance Stroll, while Gustavo Menezes made good progress after the second restart to take seventh.

Russell dropped as low as 18th after the incident with Leclerc but he put in a fantastic recovery over the limited number of green flag laps.

The BRDC F4 champion – who has qualified on the front row for race two – was 13th at the final restart but made up five places in the final three laps to finish eighth.

On the last lap he relegated fellow debutants Maximilian Gunther and Callum Ilott to ninth and tenth respectively. Ilott had a strong first race however, including a fine move around the outside of Stowe on Nicolas Beer.

Leclerc had to come from further back than Russell but also made good late progress, finishing 12th at the flag. The Monegasque driver gets to start from pole position in the remaining two races at Silverstone.

Deletraz to claim pole in first qualifying of NEC season