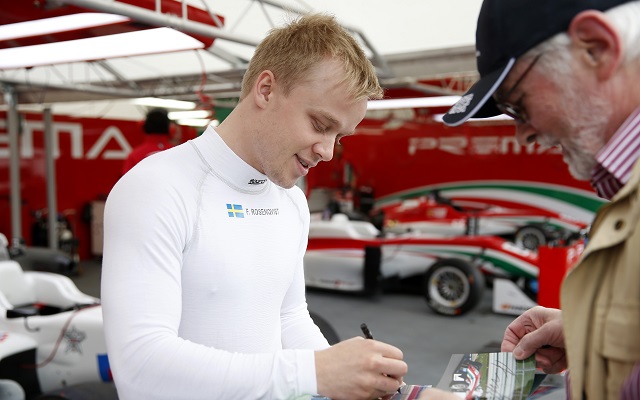 Felix Rosenqvist kept up his record of being fastest in qualifying for every race so far in the FIA F3 European Championship in 2015 by topping a wet second session at Hockenheim.

The Swede’s benchmark time came before a red flag stoppage with five minutes to go, with George Russell in trouble after contact.

At the chequered flag, second-placed Charles Leclerc cut the gap to Rosenqvist down to two tenths of a second, but couldn’t deny him pole position.

There was a similar gap in the ranking for second-fastest times, as Rosenqvist kept up his 100 per cent record in qualifying so far this season (he went on to be excluded from Q2 at Silverstone, handing double pole there to Leclerc).

Maximilian Gunther repeated his impressive third place from Friday’s qualifying for both race two and race three, even briefly snatching second from Leclerc in the final stages before the Monegasque improved his time.

Callum Ilott moved up to a fine fourth at the end of the session, the karting graduate relegating championship-leading Carlin team-mate Antonio Giovinazzi to fifth.

Lance Stroll took sixth ahead of Jake Dennis, while Alex Albon recovered from the crash that put him last on the grid for race one by taking eighth. German F3 champion Markus Pommer was ninth, and Santino Ferrucci took 10th.

Stroll’s second-fastest time gives him P4 on the grid for race three ahead of Ilott and Giovinazzi. Mikkel Jensen – 12th for race two – will be seventh, followed by Ferrucci, Pommer and Gustavo Menezes.

After qualifying down in 20th for race one, Russell’s incident leaves him 18th on the grid for race two and 25th for race three.

“Was on my best lap when a driver went wide, re joined the track without looking and smashed completely into the side of me,” he tweeted afterwards.