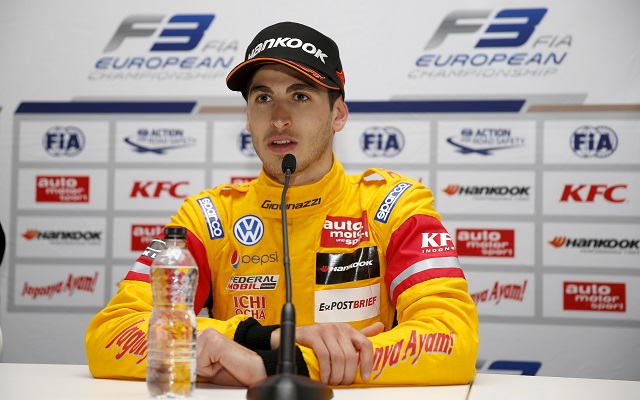 Antonio Giovinazzi extended his lead in the FIA F3 European Championship with his first victory of the season in a wet first race at Hockenheim.

After starting second on the grid, Giovinazzi passed pole-sitter Felix Rosenqvist around the outside on the opening lap.

From there, the Italian survived two safety car restarts, and his win was secured by a third caution period late on that ran until the chequered flag.

Rosenqvist, who has pole position for all three races at Hockenheim, had to make do with second on his 27th start at the German circuit in an F3 car.

Charles Leclerc scored his third consecutive podium after taking third away from Maximilian Gunther on lap one.

Jake Dennis got up to fourth from sixth on the grid, relegating Gunther to fifth. The German rookie will however get two more chances to start from P3 after continuing his strong qualifying showing this morning.

After qualifying down in 20th, Silverstone winner George Russell recovered as far as 12th, while Alex Albon came from the back of the 35-car grid to finish 14th.

The first safety car was required to fish Pietro Fittipaldi‘s car out of the gravel, the second when Tatiana Calderon and Nicolas Beer collided and the third when Raoul Hyman went off. Five other drivers failed to make the finish