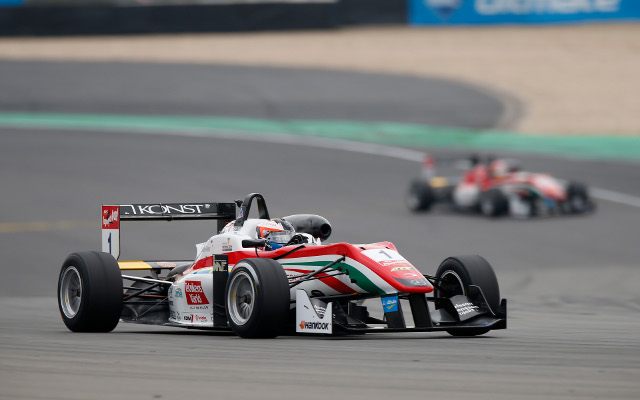 Felix Rosenqvist has secured the FIA Formula 3 European Championship title and taken his third win of the weekend at the Nurburgring, after leading through four safety cars.

The championship was effectively settled at the first corner of the race.

Had pole-sitter Rosenqvist won, Antonio Giovinazzi needed to finish second to keep his hopes alive, but the Italian was taken out of third place by contact from a fast-starting Mikkel Jensen.

Having dropped to the back, Giovinazzi pitted with damage at the end of lap one, and with him out of the points, Rosenqvist just needed to finish in the top five.

The safety car periods for incidents down the field prevented the Swede from having a smooth race out front, but in many ways he was shielded from any potential dramas by having his three Prema team-mates Lance Stroll, Nick Cassidy and Jake Dennis directly behind him in the queue at each restart.

The fourth and final restart came with time for just one green flag lap, which Rosenqvist completed to take his 27th victory at European F3 level since 2011.

Stroll was nine tenths back for his second podium of the weekend and fifth from the last three events, while Cassidy rounded out his two-event run for Prema (the Hockenheim finale clashes with his Japanese title decider) with a second podium of his own from seventh on the grid.

The first of the safety car periods came after Nicolas Pohler wiped out Alessio Lorandi and needed recovering from Turn 5; the second when Sam MacLeod‘s spun car was collected by Matt Rao at Turn 4.

Dorian Boccolacci hit Ryan Tveter at Turn 1 to trigger the third interruption, and Lorandi was involved again in the fourth as he and Tatiana Calderon found the gravel at the final corner.

Despite the considerable lack of green-flag running, Giovinazzi fought back through more than half the field to finish 13th.