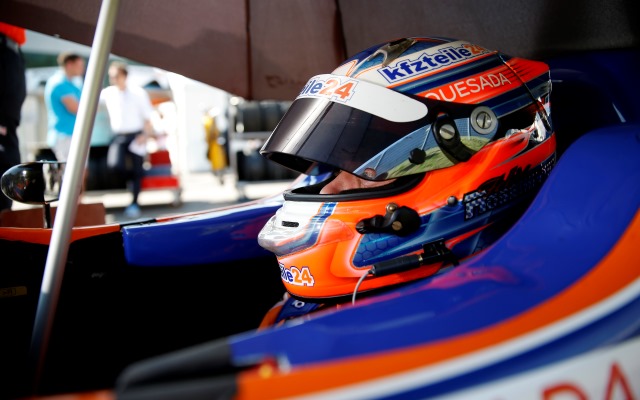 Moving into P1 with about ten minutes left, the event veteran then crashed at Maternity on his next lap – all that could be seen on the television feed was his front wing left sitting in the middle of the road.

This triggered the 40-minute session’s only red flag, and most drivers had the chance to do one flying lap after the restart, with Rosenqvist’s benchmark going unbeaten.

Jordan King climbed up to second at the flag, 0.292s slower than Rosenqvist. European F3 champion Esteban Ocon found some much-needed extra pace after a subdued Thursday, leading much of the session before dropping to third. Rival Max Verstappen ended up just one place further back, exactly half a second off the pace.

Lucas Auer was fifth ahead of Antonio Giovinazzi, who holds a provisional front row spot going into second qualifying. Nicholas Latifi was seventh ahead of Stefano Coletti, Nick Cassidy and Roberto Merhi.

Antonio Fuoco ended his session early when he slid into the wall at Fisherman’s on his first flying lap.