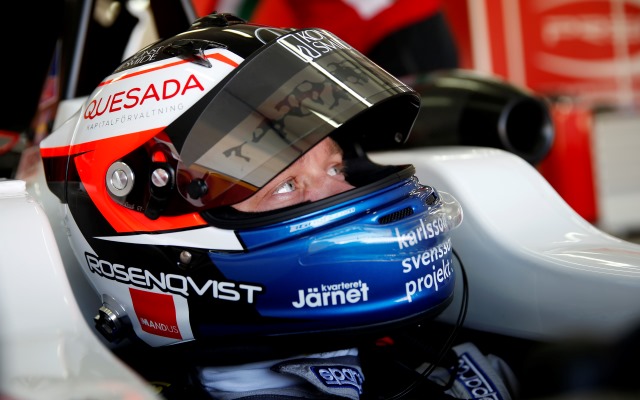 Felix Rosenqvist claimed pole position for the first race of the second FIA F3 European Championship round at Hockenheim in first qualifying on Thursday afternoon that was twice red-flagged.

A veteran of 26 F3 races at the German circuit, Rosenqvist followed up his free practice performance that saw him top both sessions to claim pole late in qualifying with a time of 1m32.455s.

He was improving again on his next lap when Carlin team-mate Tatiana Calderon caused a premature end to the session.

After a mid-session red flag triggered by an off for Alex Albon, Maximilian Gunther had taken top spot, and although the German rookie was briefly displaced by Raoul Hyman, he reclaimed provisional pole and held it until Rosenqvist’s flyer.

He finished up third ahead of Charles Leclerc, who had taken a turn in P1 just before the red flag but had his time deleted.

Rosenqvist’s three Prema team-mates filled the rest of the top seven, with Lance Stroll in fifth ahead of Jake Dennis and Brandon Maisano.

Hyman finished up eighth to back up his strong practice showing, while the top 10 was completed by Red Bull Junior Callum Ilott and German F3 champion Markus Pommer.

Silverstone race winner George Russell was the most notable driver further down the order, finishing a lowly 20th, while Albon ended up 35th and last having not been able to set a representative time.