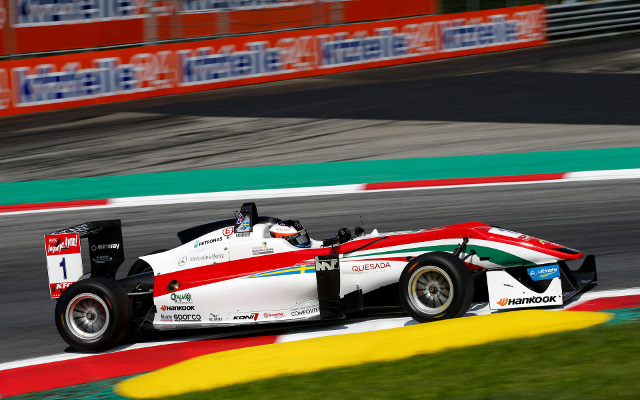 Felix Rosenqvist denied Jake Dennis in qualifying for the first FIA F3 European Championship race at Spielberg, beating his team-mate by seven thousandths of a second in a one-two-three for Prema Powerteam.

Practice pacesetter Rosenqvist had seemed in control midway through the session, but Dennis was able to beat his benchmark by 0.044s.

Dennis went on to improve by a tenth and a half with only a few minutes remaining, but Rosenqvist promptly bettered his effort by 0.007 seconds.

British driver Dennis failed to improve in response, enabling Rosenqvist to claim his 10th pole of the season.

The top four in the championship had occupied the top four places at that stage, but Lance Stroll then climbed to third to complete a top three lockout for Prema.

Points leader Antonio Giovinazzi and his nearest rival Charles Leclerc both bettered their times at the death but remained fourth and fifth respectively, split by just 0.013s.

Motopark youngster Sergio Sette Camara popped up in an impressive sixth at the end of the session, demoting the regularly-inseparable British-born duo of George Russell and Alex Albon.

Markus Pommer and Gustavo Menezes completed the top 10, with Mikkel Jensen falling from third to 11th in the final six minutes or so.

His Mucke team-mate Maximilian Gunther was the lowest-placed of the top 10 in the standings, occupying 15th place behind Raoul Hyman, Callum Ilott and the fourth Prema entry Brandon Maisano.

Double R debutant Matheus Leist was 31st of the 33 drivers who took part in the session.

Carlin’s Ryan Tveter was absent, as he was for much of practice.