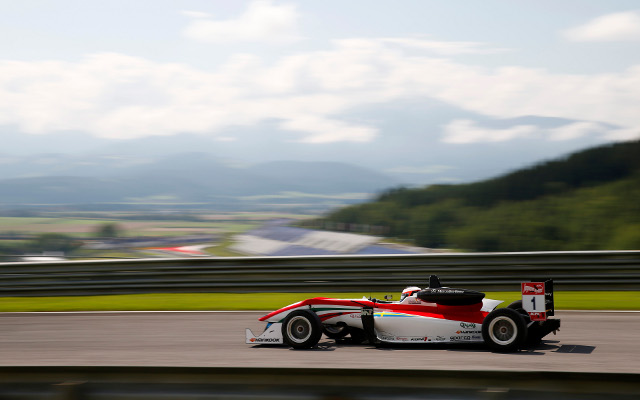 Felix Rosenqvist and Antonio Giovinazzi claimed a pole position each in the second qualifying session at the FIA F3 European Championship round at Spielberg.

Following a red flag, Rosenqvist moved into top spot with six minutes remaining, but was demoted by Giovinazzi a couple of minutes later.

An improvement from Giovinazzi made his pole position look secure with just a minute left on the clock but Rosenqvist went even quicker, setting a time of 1m24.395s.

In response, Giovinazzi set personal best times in the first two sectors but lost time in the third, so had to settle for second in the times.

The championship leader will however start on pole position ahead of Rosenqvist for race three, based on the drivers’ second-best times from the session, with the Italian bettering the Swede by 0.041s.

Lance Stroll repeated his third place from the first session, while the impressive Sergio Sette Camara improved upon his sixth place from Q1 to take fourth ahead of Motopark team-mate Markus Pommer.

Camara will line up third for race three followed by Pommer and Stroll.

After missing out on pole for race one by just 0.007 seconds, Jake Dennis could only manage the 10th best time.

The Briton will climb to seventh on the race three grid, behind Leclerc and ahead of Albon and Russell.

Callum Ilott will move up from 14th to 10th with Jensen dropping to 13th behind Santino Ferrucci and Gustavo Menezes.