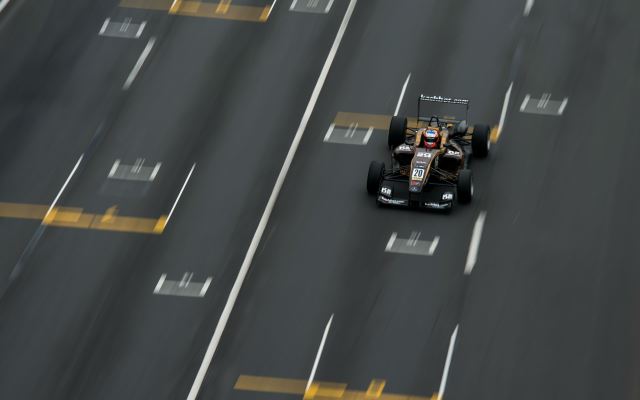 Felix Rosenqvist recovered from falling to third place to beat Mucke Motorsport team-mate?Lucas Auer to win the qualification race at the Macau Grand Prix, as Max Verstappen crashed out while running second.

Rosenqvist got a decent launch from pole position, but was passed for the lead by Auer before the high-speed right-hand kink at Mandarin.

Auer built a two-second lead up front over Verstappen, who had got up from fifth to second on the first lap but then sustained heavy race-ending suspension damage after contact on lap three.

Verstappen made it back to the pits despite needing to use reverse gear to get around the Melco hairpin, but the safety car was still needed to recover the car of Sam MacLeod that had gone into the wall earlier in the lap.

The race restarted with three laps remaining, with Auer seemingly getting himself a good initial gap over his pursuers. It wasn’t to be enough though, with Rosenqvist getting into his slipstream and reclaiming the lead into Lisboa.

F3 veteran Rosenqvist, making his fifth appearance at Macau, quickly built a 1.5-second lead on that lap, and had nine tenths over Auer when the race finished two laps later.

Tom Blomqvist kept himself in contention with third place, resisting a couple of attacks at Lisboa late in the race from European F3 champion Esteban Ocon.

Nick Cassidy – in just his third race weekend with the T-Sport team – was an impressive fifth place. The New Zealander passed relative veteran Roberto Merhi at the restart, the Spaniard having climbed from tenth to sixth on the opening lap.