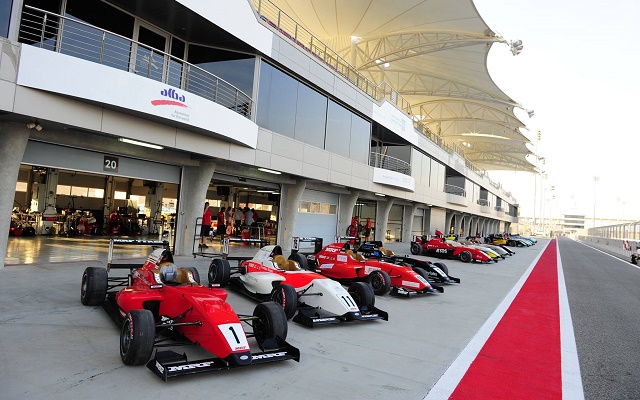 British drivers Ryan Cullen and Struan Moore shared the spoils on Friday by winning the first two races of the second round of the 2014-15 MRF Challenge season at Bahrain.

GP3 regular Cullen started race one from second on the grid, but dropped to fourth at the start. However, he managed to quickly move back up to second after passing Toby Sowery and Kyle Mitchell in quick succession.

After a safety car period, called out to remove the stricken car of Tarun Reddy, Cullen began to home in on polesitter Raj Bharath for the lead, and made his move three laps from the end. He then held on to win the race, 1.5 seconds ahead of Bharath.

Mitchell took third, while Moore got ahead of Sowery for fourth. Aussie Dylan Young came home in sixth, with Indian driver Vikash Anand in seventh. Laura Tillett, Freddie Hunt and Vinicius Papareli completed the top ten in the first race.

Race two, which was run to a reverse-grid format for ?the top six drivers, saw Young start from pole. Sowery, starting second, took the lead on lap three by overtaking Young, while Bharath too found a way past the race two polesitter a lap later. Young lost further ground thereafter, falling behind Moore and Cullen as well.

Sowery and Bharath had an enthralling battle for the lead, exchanging positions several times. Both made slight errors which allowed Moore to catch up, and eventually pass the pair for first place.

What followed was another superb battle for the lead between BRDC F4 regular Moore and F3 Cup champion Sowery, but the former prevailed in the end, taking his first win in the series. Cullen rounded off the podium, having passed Bharath for third on lap eight.

Young could manage only fifth from pole, with Mitchell taking sixth ahead of Reddy. Mathias Lauda recovered from an early incident with Advait Deodhar to take eight, with Camren Kaminsky and Hunt completing the top ten.