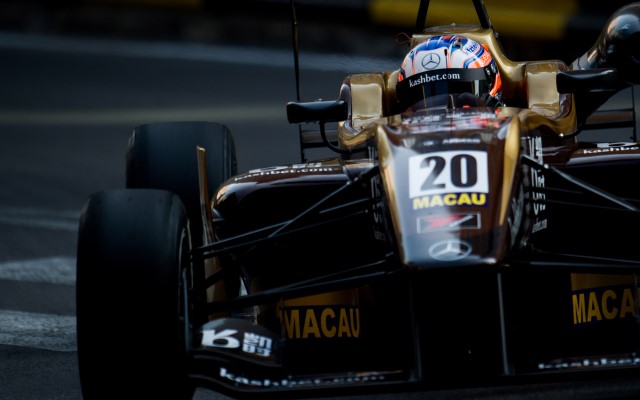 Felix Rosenqvist has claimed victory in the Macau Grand Prix at the fifth attempt, in a race that was suspended after a big first-lap crash.

Pole-sitter Rosenqvist didn’t get the best of starts, and it was his Mucke Motorsport team-mate?Lucas Auer who led into turn one, followed by Tom Blomqvist.

At Lisboa, Auer was under attack over either shoulder ? Blomqvist on his outside and Esteban Ocon on the inside. Auer outbraked himself, and Blomqvist needed to take avoidance when he turned in to the corner. In doing so, he cut across the front of Ocon and the pair interlocked wheels.

Ocon seemingly suffered suspension damage, and at San Francisco he went straight on, taking Blomqvist with him. Some of the drivers immediately behind – such as Rosenqvist, Auer and Nick Cassidy – got through but the track became blocked and Yu Kanamaru was vaulted up above the cars of Ocon and Blomqvist and landed on top of the tyre barrier.

After a lengthy red flag delay, 23 cars were able to take the restart, even though some had required some serious work by their mechanics.

Rosenqvist again led Auer, and the Austrian got the slipstream to nose ahead into Lisboa, only to run deep once again and fall to third behind Rosenqvist and Cassidy.

Rosenqvist set consecutive fastest laps up front to open up a lead of over four seconds on his way to the chequered flag.

Cassidy twice built a gap over Auer during the race but eventually succumbed to the Austrian, but still claimed a podium on an impressive Macau debut, in only his third weekend in F3 in 2014 with the T-Sport team.

Roberto Merhi held off Nicholas Latifi for fourth place, with GP2 veteran Stefano Coletti surviving a clash with the barrier at Mandarin on the very first lap to finish sixth.

After his qualification race crash, Max Verstappen came through from towards the rear of the field at the restart to finish seventh in his final race before his Formula 1 debut in Melbourne next March, setting the fastest lap in the process.

16-year-old Santino Ferrucci finished eighth on his debut ahead of Japanese driver Kenta Yamashita, who brought a positive end to a difficult weekend for the TOM’S-Toyota team. Gustavo Menezes completed the top ten.

Spike Goddard and Martin Cao joined Ocon, Blomqvist and Kanamaru in failing to take the restart. Jordan King and Antonio Fuoco both needed significant work on the grid, and although they did get to restart, they later retired.