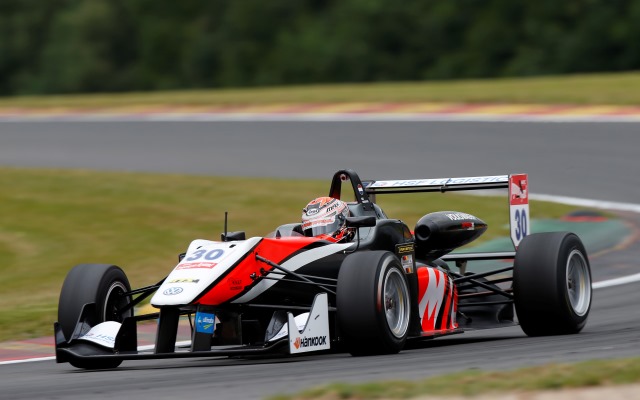 Karting graduate Max Verstappen set the overall fastest time in the practice sessions for the 2014 FIA F3 European Championship’s fifth round at Spa-Francorchamps.

Although in the first session the 16-year-old youngster only finished fourth, the following practice saw huge improvement from almost every driver, especially from Verstappen, who went more than two seconds faster compared to his time from session one.

Mucke Motorsport’s Felix Rosenqvist was on top in the first practice, beating second-placed Jordan King and third-placed Antonio Fuoco, who were the fastest Carlin and Prema drivers respectively, by 0.4s.

It was a difficult first session for the leading trio in the standings, as Tom Blomqvist was eighth, Lotus junior Esteban Ocon finished in 12th and Lucas Auer was not able to complete a time. The top ten was completed by Spike?Goddard and Antonio Giovinazzi.

In the second practice Verstappen dominated the field with beating the whole field by more than 0.7s. Ocon fought back to end up in second, closely followed by his teammate Ferrari junior Fuoco.

Giovinazzi and Serralles took seventh and eighth respectively and the top ten was completed by Alex Toril and Dennis.

This weekend American driver Santino Ferrucci has been added to the grid as he finally turned 16 and is allowed to race in the series. Ferrucci, who is graduating from the American F2000 Championship Series, started his weekend in a promising way with 14th fastest, beating his teammate by a second.