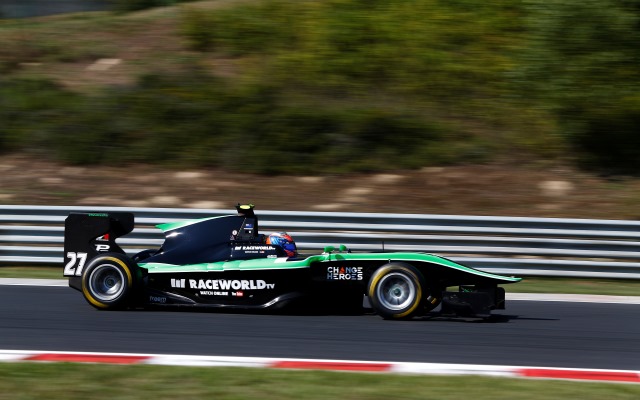 Richie Stanaway moved up to second in the GP3 title race as he held onto the lead under pressure from Robert Visoiu to win race one at the Hungaroring.

Visoiu made a flying start from fourth on the grid to actually nose ahead of pole-sitter Stanaway on the run to turn one, but a lock up on the outside line forced the Romanian to settle for second.

He had the stronger race pace though, and after spending much of the race within half a second of Stanaway, began to really put the pressure on later on as the Kiwi struggled with his tyres.

On the penultimate lap, Stanaway ran deep at the chicane and missed his braking point. Visoiu dived alongside but then lit up his tyres in the middle of the chicane, sending him off onto the grass and dropping him to third.

Stanaway therefore scored his second win of the season and the first victory for Status Grand Prix in the opening race in a GP3 weekend for nearly four years, since Robert Wickens won at Spa in 2010.

After getting past the slow-starting?Alex Lynn at the start, Nick Yelloly benefited from Visoiu’s mistake to move up into second and complete a Status one-two.

Lynn had fell to fifth after bogging down at the start but claimed fourth from Patric Niderhauser at turn two, but finished off the podium in a Saturday race for the first time.

Niederhauser fell to sixth on the penultimate lap behind Emil Bernstorff, and just kept Arden team-mate Jann Mardenborough behind him on the last lap.?Dino Zamparelli fell from fifth to eighth on the first lap but will start on reverse grid pole for race two, setting up a repeat of the battle that he had with Mardenborough for the Sunday win in Germany one week ago.

Santiago Urrutia had been poised to score his first points after climbing from 13th on the first lap, but lost three places on the last lap and stopped after the flag. Dean Stoneman and Jimmy Eriksson took the final two points positions, with Marvin Kirchhofer falling one place short as he recovered from a grid penalty that left him starting 14th.