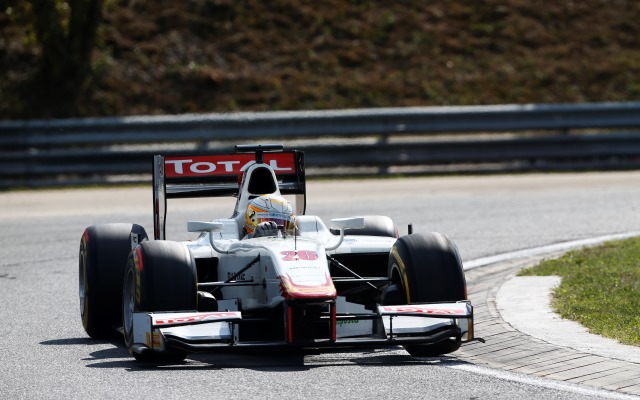 Arthur Pic claimed his first victory in GP2 in the feature race at the Hungaroring, recovering from a poor start thanks to the correct strategy.

The Campos driver started third but fell to sixth on the first lap, including losing the status as the first driver to start on options to Raffaele Marciello. Marciello however picked up a penalty for speeding during his pitstop, handing Pic that initiative.

Pic was able to stay within around 20 seconds of pole-sitter Felipe Nasr and Jolyon Palmer, who had gone from sixth to second by turn one of lap two.

Nasr began to lose pace on his prime tyres and eventually pitted, having used a resolute defence to keep Palmer behind. He rejoined way down the order though, as did Palmer.

The safety car made a lengthy appearance late on when Sergio Canamasas and Nathanael Berthon made contact between turns one and two, necessitating medical attention for the former.

Any remaining prime-starters therefore made their pitstops and Pic inherited the lead, and he only had to hold on up front for one lap once the race got going again.

Rio Haryanto held second under the safety car but then had his rear-left wheel make a bid for freedom, forcing him into retirement. The podium was therefore completed by Stefano Coletti, who suffered an early puncture after contact with Julian Leal, and Adrian Quaife-Hobbs, who started back in 22nd place.

Takuya Izawa scored his best result in GP2 in fourth just a tenth of a second ahead of Palmer, who had passed Nasr just before the Canamasas-Berthon incident ahead of them and then got ahead of Daniel Abt at the restart.

Nasr failed to get past Abt and therefore lost the four points he had taken out of Palmer’s championship lead by claiming pole.

Berthon still sat eighth at the restart but was then relegated to tenth, with Marciello recovering from his drive-through to claim eighth and reverse grid pole for the sprint race. Stoffel Vandoorne finished ninth, having spent much of the race in fourth after failing to follow Palmer past front row starter Tom Dillmann and therefore spending most of his first stint stuck behind the slow Frenchman.

Ferrer and Fittipaldi claim poles for Protyre round at Brands Hatch