Ferrer and Fittipaldi claim poles for Protyre round at Brands Hatch 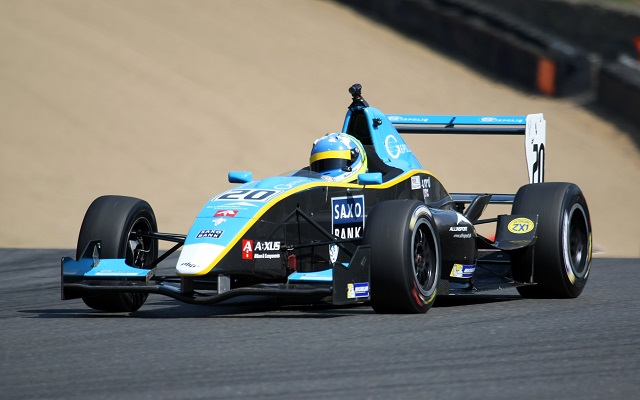 MGR duo of Matteo Ferrer and Pietro Fittipaldi shared the spoils in the two Protyre Formula Renault qualifying sessions ahead of the season’s third round at Brands Hatch Indy.

Ferrer, who previously scored poles in the Protyre series in the 2014 opener at Rockingham, was the man of the moment in session one, setting his personal best time in the session with seven minutes remaining on the clock.

Championship leader Fittipaldi managed a late improvement but ended up one tenth off.

Dimitris Papanastasiou, Hayden Edmonds, Scorpio’s Piers Hickin and SWB racers Atte Lehtonen and Jack Butel made up the rest of the order for race one.

In qualifying two, it was Fittipaldi’s turn to shine as the Brazilian claimed his maiden pole in the category with the only sub-46s lap of the 20-minute session. Ferrer ensured another MGR front row lockout, while Gill and Hickin made up row two.

Other MGR drivers Reddy and Noble took fifth and sixth respectively, with Fischer and Dussault lining up behind on row four.

Papanastasiou, Edmonds, Lehtonen and Butel completed the grid for the second and final race of the weekend.