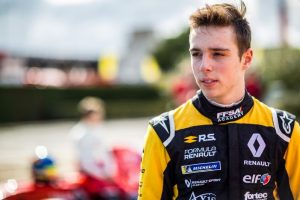 The 2017 French Formula 4 champion has driven for Fortec Motorsports this season, but did not score points until the sixth round of the season at Spa-Francorchamps, when he finished fourth and sixth in the two races, before also scoring in three of the next six races.

Rougier missed free practice at Barcelona due to a lack of payments from his sponsor, but Fortec was still hopeful the issue could be resolved ahead of qualifying for the first race. That proved not to be the case, and Rougier will not appear in the car.

“I’m not driving at all this weekend, or the post-season test. It has made it more difficult for next year,” Rougier told Formula Scout.

“At least I have the whole winter to think about it but with the new championship called Eurocup [with the regional F3 chassis], it has made it harder for all of us. It’s more expensive.”

Rougier won a place on Renault’s junior scheme with his French F4 title success, but there have been question marks before over the extent of the manufacturer’s commitment to him.

It appears unlikely that he will run in Renault colours in 2019, but he does have the guidance of esteemed Formula 1 driver manager Didier Coton and ex-racer Olivier Panis.

Fellow Renault juniors Max Fewtrell and Christian Lundgaard sit atop the Eurocup standings with R-ace GP and MP Motorsport, while Victor Martins, who finished second to Rougier in French F4, is fifth.

Casper Tobias Hansen will drive Rougier’s car in the post-season Barcelona test for one day as a prize for winning the Danish F4 title.