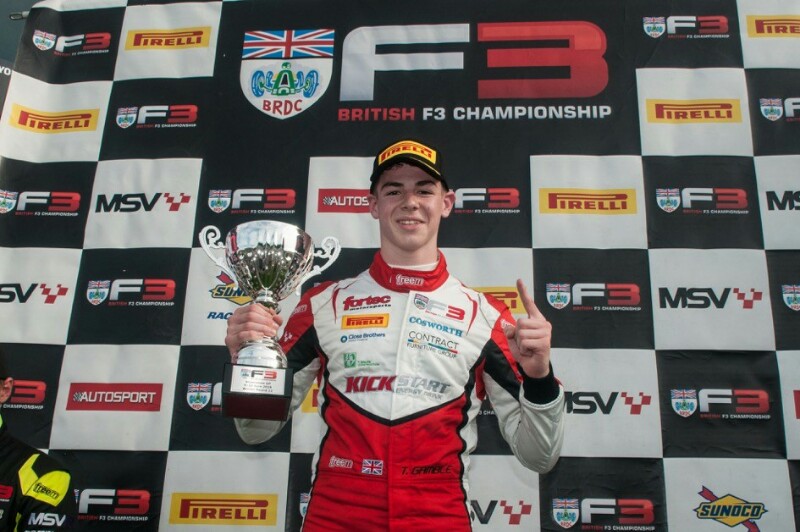 2018 went in a different direction for Tom Gamble compared to his closest rivals last season in Ginetta Junior.

While Seb Priaulx and Kiern Jewiss moved on to compete in British Formula 4 at the beginning of the year – which Jewiss won – Gamble jumped a step to join the BRDC British Formula 3 grid.

What followed was by all means a success: fifth in the standings, including two race wins and five further podiums, BRDC Rising Star status and a spot in the final four for the McLaren Autosport BRDC Award.

After winning in the junior category of the Rotax Max Winter Cup in 2015, Gamble joined Ginetta Junior with HHC Motorsport for part of 2016, while also still competing in karting championships.?He made the step up to Ginetta Junior full time a year later, joining JHR Developments along with his eventual title rival Priaulx.

Even though Priaulx and Douglas Motorsport?s Daniel Harper dominated in terms of qualifying performance at the beginning of the season, it was Gamble who led the championship with three wins and six podiums in the first seven races after the third round at Thruxton. Priaulx then went on a five-race winning streak, which Gamble eventually stopped at Croft.

The season took an odd turn for Gamble, Priaulx and the rest of JHR Development?s driver line-up after the team was suspended from competing in Ginetta categories while an investigation into engine irregularities took place. 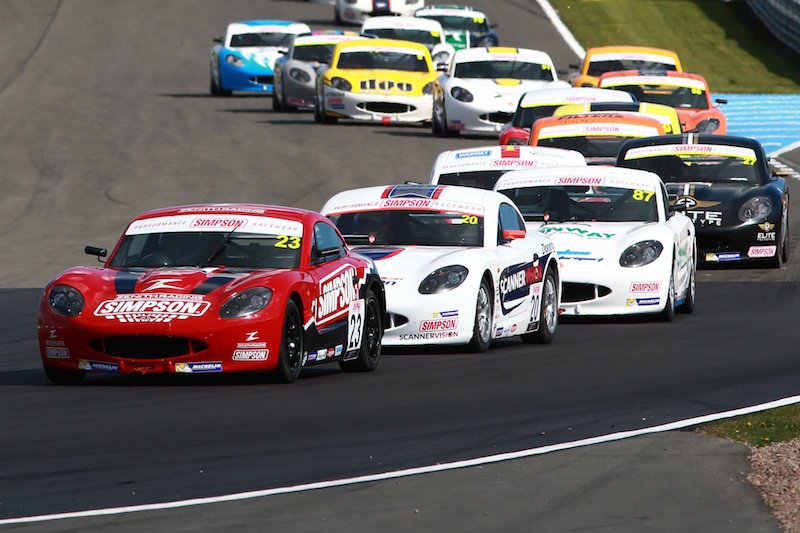 Gamble ended up joining Elite Motorsport for the final three rounds, with Priaulx going to HHC. He ended up winning four races, including all three at Silverstone, and clinched the title at Brands Hatch.

The frontrunners of the 2017 Ginetta Junior field then went their different ways. Priaulx and Jewiss went to British F4, while Harper moved into GT racing with a Porsche scholarship. While older brother George is also a Porsche racer, Gamble left the TOCA support bill, choosing British F3 with Fortec Motorsports for his first season in single-seaters.

?Yeah, I mean there?s a lot to learn,? Gamble told Formula Scout recently. ?Obviously going from Ginettas, with much better tyres and not much power and then to this, it?s got a lot of downforce. The team have been great to help me learn it.?

Driving for an established team like Fortec, which has run the likes of?Juan-Pablo Montoya and Will Power in the past, has been beneficial for Gamble’s progress as a driver, and he has also learned from the team’s driver coach Matt Howson.

Howson has his own experience as a racing driver, winning the LMP2 class in the 2015 Le Mans 24 Hours, but his coaching experienced is backed by an honours degree in Psychology. It?s in this area, which is not as noticeable to the eyes of the fans, that Gamble has worked on and improved during the 2018 season. 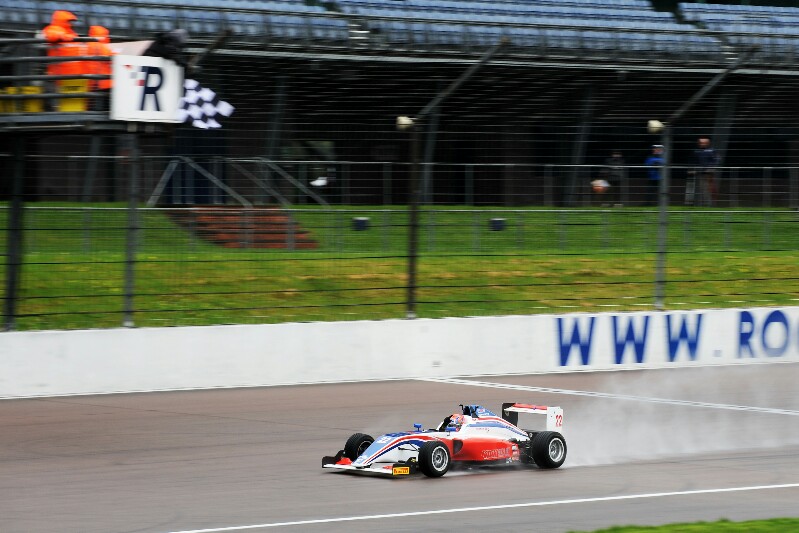 ?I think he?s become more measured,? Howson said. ?So for example, I think at the beginning of the year if he had a session where he wasn?t quick he?d get quite down on himself, where he understands (now) that?s just part of the game.

?And you know, that?s been tough. We?ve had a few engine issues this year, a couple of things that he?s had to contend with, and what happens is now, when we get it fixed he?s always straight back up there, so he?s become mentally much tougher.?There?s never been an issue with his speed and his talent, and he?s clearly got a lot of ability, but he?s just building that experience to deal with more situations in a better way.?

His talent on track has been noticeable throughout the season, especially when considering he is one of the more inexperienced drivers in the field, most of whom had a season of single-seaters under the belt before 2018.

In the reverse grid race he made up seven positions to finish sixth, and he rounded off the weekend with second place, the first of his seven podiums.?During the race he put himself in a position to fight with Kjaergaard for victory, and left Oulton hungry for his first win.

That win came just one race later at a wet Rockingham after snatching pole position earlier in the day from Lundqvist, a result that put him in the championship lead.

It wasn’t plain sailing from that point. His best finish at Snetterton was eighth, while at the penultimate round at Donington Park he lost his second place finish in race two due a technical infringement with his car, which was also suffering with engine troubles. The points lost there could’ve left him third rather than fifth in the standings. 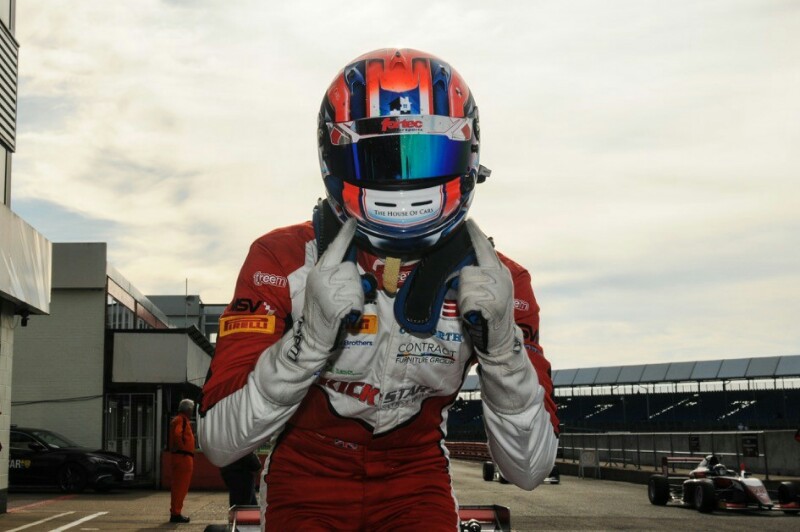 But he did pick up a second win at the fourth round of the season at Silverstone, as well as two second place finishes and a remarkable double pole at Spa-Francorchamps, the only weekend of the British F3 calendar to take place outside of the UK. It was the one round of the season where Gamble’s inexperience counted for less, and he was arguably the strongest driver that weekend.

“A lot of ups and downs,” is how Gamble sums up his season. “Obviously a few wins, a few poles. We?ve learnt a lot, we?ve struggled at quite a few races as well. It?s been a good season for me to learn.”

He reckons that he has improved “quite a bit” over the year, and Howson?described Gamble’s season as being ?very impressive? ?considering his lack of single seater experience heading into 2018.

?I mean he?s only got one year of racing experience out of karts,? said Howson. ?Which is Ginetta Junior, so never in formula cars.

His performances earned him a finalist spot for the McLaren Autosport BRDC Award along with Jewiss, 2017 British F4 champion Jamie Caroline and Eurocup Formula Renault champion Max Fewtrell. The way he’s adapted to single-seaters, there’s nothing to say Gamble can’t come out on top.