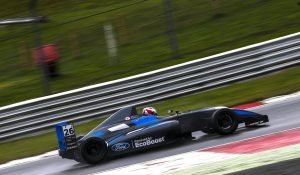 Jewiss finished fourth in the Ginetta Junior championship last year in his first season out of karting, and won once at Knockhill. He topped the morning session around Brands Hatch’s Indy layout with a 52.976s lap, over 1.8 seconds faster than the next best driver.

The whole field ran on wet tyres for the duration of the test due to the weather, which made remaining on track increasingly difficult for the drivers.

Jewiss’s Ginetta Junior rival Seb Priaulx, son of multiple World Touring Car champion Andy, was second fastest for Arden, and will race for the team in his first season in single-seaters.

Johnathan Hoggard was the fastest of the returnees for Fortec in third, and recorded the greatest number of laps across the two sessions.

Fellow returnees Jamie Sharp (Sharp Motorsport) and 2017 Challenge Cup champion Hampus Ericsson (Fortec) were fourth and fifth fastest, with Hoggard and Ericsson set to remain at Fortec for their first full seasons in the championship.

Hauger topped the wetter afternoon session, after only getting 11 timed laps on track in the morning, with Arden team-mate and fellow Red Bull junior Jack Doohan setting a similarly low number in the opening session.

Doohan was the slowest of the Arden quartet, with Carlin refugee Patrik Pasma going fourth fastest in the afternoon and eighth fastest overall. Pasma is expected to join Arden for his second season in British F4, and has kept race sharp over the winter by contesting a F4 UAE round with the Energy Dubai team.

Double R also ran Finnish and Mexican karters Paavo Tonteri and Sebastian Alvarez in the test, while the timesheets were propped up by Fortec’s new signing Lucca Allen, who drove for Falcon Motorsport last year.

Several signings are likely to be announced in the weeks leading up to the championship’s media day in March, but the absence of Carlin is still noticeable, with only 11 cars entered into the Brands Hatch test.