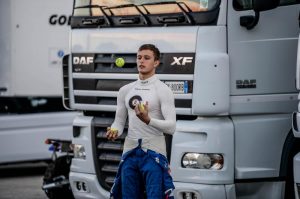 Carlin will expand to five cars for the 2018 European Formula 3 season with the signing of Euroformula Open runner-up Nikita Troitskiy.

The SMP Racing-backed Russian finished second to Harrison Scott in EF Open last year, although had a winless season due to Scott’s domination.

He also contested four EF Open races in 2016, taking one pole and a podium, and finished 14th in Formula Renault NEC.

Two of his three wins in car racing came in the 2015-16 MRF Challenge season, when Troitskiy first started working with driver coach Warren Hughes, with the other occurring in his maiden season in single-seaters in SMP Formula 4 in 2015.

His move to European F3 means there will be two SMP-supported rookies on the grid, with Toyota Racing Series champion Robert Shwartzman driving for Prema, the only other team to field five cars.

?It?s nice to be a part of such a strong team as Carlin for the 2018 season,” said Troitskiy.

“The team all work together and do their job perfectly well so I look forward to joining them. I will do my best to show the highest result in 2018.?

?It is with great pleasure that we welcome Nikita to our team,? team boss Trevor Carlin added.

?Nikita is a driver who we have competed against in the past and watched with interest in championships he has raced in.

He is a very dedicated and determined driver and will be a fantastic addition to our European F3 team. We have another great line-up ahead of the 2018 season so we?re looking forward to the season beginning at Pau in May.?

There has been 18 seats on the grid filled so far, with Fortec Motorsports being the only team yet to reveal a driver.