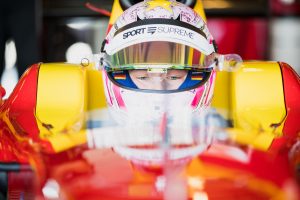 Mercedes-supported European Formula 3 runner-up Maximilian Gunther will continue his rivalry with Lando Norris by joining him on the Formula 2 grid this year.

Gunther finished eighth, second and third in his three seasons in European F3, and briefly led the championship last year with Prema Powerteam.

He eventually dropped behind Norris and Joel Eriksson, who have stepped up to F2 with Carlin and DTM with BMW respectively.

Over the winter period Gunther made his first F2 test appearance with Racing Engineering at Abu Dhabi, and got a taste of Super Formula and Formula E machinery at Suzuka and Marrakesh.

?I?m absolutely ready to take the next step and can?t wait to go up against the world?s best young drivers,” revealed Gunther.

“I know that this move will be successful with the backing of Arden?s experienced team.”

?We are delighted to welcome Maxi into the team,” said Arden team manager Kenny Kirwan.

“He has been extremely competitive and consistent in European Formula 3 over the past number of years.

“Together with Nirei, we believe that we will start the season with one of the strongest and most consistent rookie driver pairings in the FIA Formula 2 Championship.?

Gunther’s first outing with the team will likely take place tomorrow at Magny-Cours, in the first public shakedown of the Dallara F2 2018 car.