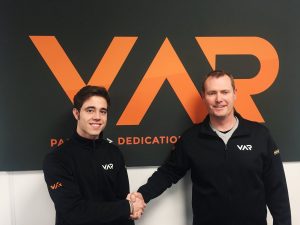 Alders was the 2012 Dutch Championship Academy winner, and has spent the majority of his karting career in the Benelux region, progressing up the classes of the BNL Karting Series and becoming DD2 Class champion last year.

He also finished sixth in the DD2 Class of the Rotax Max Challenge Grand Finals with the crack Birel ART team in 2017, and tested with VAR on multiple occasions.

?[I have] a great chance going into single-seater racing with Van Amersfoort Racing,” Alders said.

“In my opinion Van Amersfoort Racing is the best team in ADAC F4.

“Racing with a Netherlands-based team as a Dutchman makes it even more special. I want to be competitive, [and] the experiences so far and the smooth collaboration with the team gives me all the confidence I need.?

“Joey made a strong impression during the test days. Especially considering the fact that he had never been behind the steering wheel of a Formula 4 car before. We are looking forward to accompany Joey in his ambition to succeed in motorsport.?

Alders is VAR’s first signing for ADAC F4, with Keyvan Andres being the team’s sole European Formula 3 driver at present.