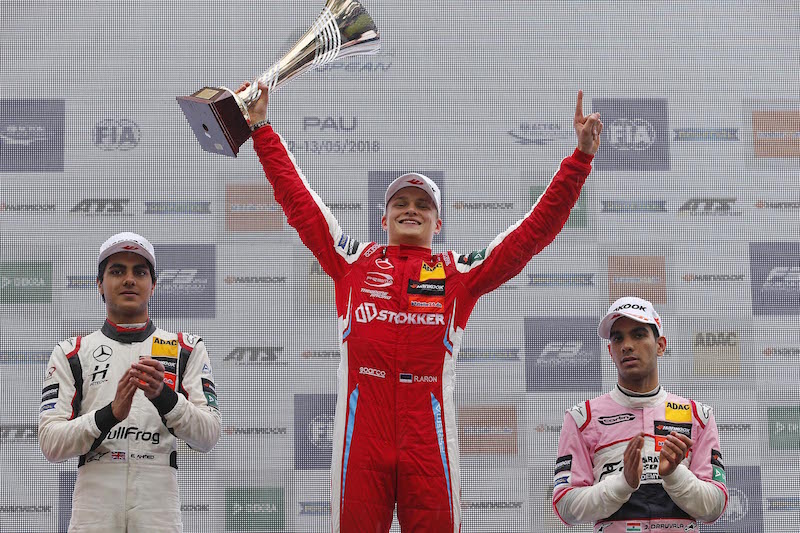 The rain began to fall shortly before the race, with many drivers forced into a late switch from slick to wet tyres on the grid before the formation lap.

At the start, Prema driver Aron jumped from third on the grid past the front-row occupying Hitech cars of Enaam Ahmed and Alex Palou to take the lead.

Aron led by 1.1 seconds at the end of the first lap and his advantage was touching the two-second mark at the end of lap eight when the safety car was deployed after Ferdinand Habsburg and Marcus Armstrong collided on the pit straight in heavy spray as conditions worsened.

Even when the two cars were recovered, the field remained under the safety car until the red flags came out with the clock stopped with just under 13 minutes left.

Twenty minutes later, the decision was taken to declare a result, with Aron the winner ahead of Ahmed and Jehan Daruvala, who went from fifth to third at the start.

Fabio Scherer was fourth in front of Motopark team-mate Dan Ticktum, who is under investigation for forcing Armstrong up onto the pavement and into the barriers when the Kiwi tried to stay around the outside of the Briton exiting La Gare for the first time.

Armstrong dropped down the order and was thereafter struggling with damage prior to his incident with Habsburg, which will also be investigated.

Prema pair Robert Shwartzman and Mick Schumacher came from the sixth row of the grid to finish sixth and seventh, with Jonathan Aberdein, Ben Hingeley and Marino Sato rounding out the top 10.

Race two winner Sacha Fenestraz was fifth in front of Ticktum on the run up to Pont Oscar on the first lap before falling down the order and pitting.

He leaves round one as the championship lead however after only half-points were awarded for race three, leaving Aron 2.5 points behind Fenestraz.

Palou had an awful getaway from the front row and was down in 16th when his misery was compounded with a drive-through penalty for lining up to the left of his grid box at the start.